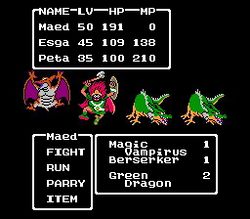 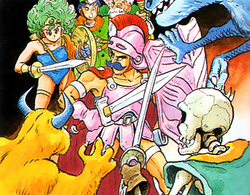 The enemies a player can meet varies both on where they are in the game and the terrain they are on. For example, the forest may contain enemies not found in the plains. For games that include travel by ship, enemies encountered while at sea are from an entirely separate set. Some enemies have a very low encounter rate and thus are almost impossible to find; these usually give out large amounts of Experience Points or some other significant reward, the most obvious example being the Metal slime.

In the NES Versions of the first four games, as well as the original version of Dragon Quest V: Hand of the Heavenly Bride, encountering an enemy is a totally random chance independent of the number of steps taken. Instead, each type of tile on the over world is assigned an encounter chance, which is then influenced by whether it is day or night, and if Holy water or Holy Protection have been used. For the original game, the encounter rates per tile type are:

In keeping with the subtle alterations to the series' mechanics in the post-Chunsoft titles, VI~VIII (as well as the remakes of the Zenithia trilogy) utilize an encounter rate based on the number of steps taken. Each step taken contributes to a hidden sum, and once the assigned threshold is reached a battle will begin. For example, the units for III's remakes are:

As a rare gimmick in Chapter 3 of Dragon Quest IV, Torneko will sometimes encounter an Innkeeper or Item shop merchant to do business with in addition to the usual monster encounters (See gallery below).

Abilities such as Torneko Taloon's Padfoot enable players to avoid or reduce the probability of Random Encounters if the player does not wish to fight in order to save time or HP. Both Random and Pedometer encounters can be prevented all together for a short time through use of the Holy water item or the spell Holy Protection, provided the lead character's level is higher than the region's benchmark. In the games that it's available in, the Gospel ring when equipped by a currently active character will remove random encounters altogether.

Similarly, if one wishes to battle more (perhaps for Exp), he or she might use other abilities increase the probability of having a Random Encounter, or, such as in the case of Whistle or the Lyre of Ire, cause one immediately. As an opposite of Holy water, use of Musk or Monster munchies will increase the encounter rate.

In all Dragon Quest games, players are given the option to flee from encounters, which if successful ends them immediately and returns them party to the field. The success of fleeing varies from game to game, but generally when if fails the enemy is given a chance to strike freely.

In the original version of Dragon Quest IV: Chapters of the Chosen the player has a 50% chance of successfully fleeing on their first two attempts. The third attempt has a 75% chance, and the fourth will never fail. Statistically this means that there is 6.25% chance that all three contingent chances will fail.