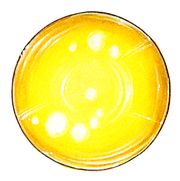 The Gold Orb (known as Golden Orb in fan localizations) is a key item in Dragon Quest series.

The Gold Orb is utilized, along with the Silver Orb, to make the castle of Zenithia fly. It is acquired early in the game, but is then lost and must be recovered again later in order to raise Zenithia.

Zenithia had fallen from the sky when Grandmaster Nimzo awoke. Dark clouds of evil emanated from the event, and a hole was rent in the Gold Orb's chamber. The Gold Orb fell out of its pedestal and into Uptaten Towers. This prompted the forces of Nadiria to lay siege to the castle, so that the legendary Hero would never be born to the Count and return the Gold Orb to its rightful place.

The Orb is given to the Hero and Bianca Whitaker by the ghost of the Towers' countess after they successfully rid the structure of ghosts. This event takes place in the first era of the game when the hero is just a child.

When the Hero encounters Ladja in the first era, Ladja takes the Orb and smashes it. This is the final event of the first era.

After visiting Zenithia with Dr. Agon, the Hero and party learns that the Orb is needed to raise the city from underwater. As a result, the Hero visits the Faerie Palace where he is able to use a magical painting to travel back in time. Once in Whealbrook using time travel, the Hero finds his younger self and switches the Orb for a Gold bauble. Hence, the item destroyed by Ladja is a fake. The Hero returns to the third era and uses the orb to raise Zenithia.

The Gold bauble is given to The Hero and party by Queen Caramel of the Faerie Palace when she tries to demonstrate that she isn't able to produce the actual Gold Orb. The bauble can be placed onto the Zenithia Castle pedestal only for nothing to occur.

The Gold Orb is an important item that must be found at Maella Abbey before the final battle with Rhapthorne.