Alefgard, as it appears in the first Dragon Quest game released in North America, Dragon Warrior.

Alefgard is a series of continents connected by bridges and caves, making it easily traversable on foot. 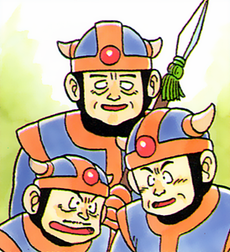 Alefgard is the original "overworld" in the Dragon Quest series. It is akin to Torland in Dragon Quest II. However, in later Dragon Quest games, the concept of giving a name to the overall world map was dropped.

Although Alefgard is a set of continents divided by water, generally the divisions are quite small, requiring only bridges to connect the various land masses. The exception to this is the southeastern continent, which can be reached only via the Quagmire Cave. Rather than identifying areas by geographical location, it is easiest to identify regions by the names of towns/villages in the vicinity (i.e. the Kol region).

Alefgard is the geographical setting of the original Dragon Quest. It contains every component of the game and must be fully explored in order to reach Charlock Castle and defeat the Dragonlord. Towns featured include Tantegel, Galenholm, Kol, Rimuldar, Damdara, and Cantlin.

Alefgard has been severely minimized in favor of the larger world map for Dragon Quest II. Almost all of the Alefgard locations have been removed with the exception of Tantegel, Charlock Castle, and the Sanctum. Overall, Alefgard plays no significant role in Dragon Quest II.

Alefgard is the 'underworld' or 'dark world' of Dragon Quest III and is reached late in the game. This game features a full Alefgard, including some locations which did not appear in the original Dragon Quest such as the Tower West of Kol. It also featured Damdara as a regular town, whereas the first game has it as a deserted town consisting of random monster encounters. At the end of Dragon Quest III, Alefgard is sealed off from the overworld.

Alefgard has its own specific world music which is used in the first 3 Dragon Quest games. This musical theme is one of the most well known in the series.

The NES Versions of DQ II and DW III would only use the overworld music from the first game while Tantegel for example would use the castle music of II and III. The remakes of both games would incorporate more of the first game's music into the appropriate areas