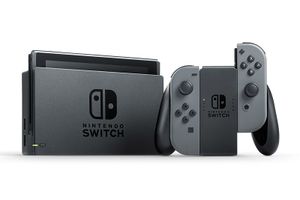 The Nintendo Switch is the seventh home video game console released by Nintendo. The console is the successor to the Wii U and it competes with Sony's PlayStation 4 and Microsoft's Xbox One console in the 8th generation of video game systems.

Known in development by its codename NX, it was unveiled in October 2016, subsequently revealed as the Switch in January 2017, and was released worldwide on March 3rd, 2017. A second handheld-only model of the Nintendo Switch, the Nintendo Switch Lite, was released later on September 20th, 2019. A third model featuring improvements to the original conolse, the Nintendo Switch (OLED model), is set to be released in October 8th, 2021. The Switch is considered a "hybrid" console; it is designed primarily as a home console, with the main unit inserted onto a docking station to connect to a television. Alternatively, it can be removed from the dock and used similarly to a mobile tablet, or placed in a standalone tabletop position visible to several players. The Switch uses Joy-Con wireless controllers, although Pro Controllers are also available as separate purchases for a more traditional controller.