Whereas the main series focuses on the adventures of a hero rising up against the forces of darkness, DQM revolves around what it means to be a Monster Master and is the much smaller-scale story of two little siblings, Terry and Milly, when they were just small children. The game opens with Milly's kidnapping by a naughty creature called Warubou, after which a polite monster called Watabou appears and explains the situation to the shocked lad, spiriting Terry off to GreatTree and starting his quest to rescue his sister.

The game begins with young Terry and Milly living peacefully in their house, in the days before Dragon Quest VI, when Terry and Milly were just children. When they go to bed at night, Terry gets up and goes into the next room. A strange monster then appears from a dresser kidnaps Milly and then vanishes back into the dresser he came from. Soon after, another monster, similar to the kidnapper, appears from the same dresser looking for Milly, but is surprised to learn that she has already been taken away. The monster, Watabou, then asks Terry if he would like to find out where his sister and the kidnapper are, and to follow him to the Kingdom of GreatTree. Watabou and Terry both go into the dresser and Terry then finds himself in a tree so large an entire thriving kingdom is set within its branches. Terry speaks with the king and explains his situation, with the king suggesting that the best way to find his sister is to win the monster master's Starry Night Tournament, as he will be granted a wish. Terry is then given a Slime named Slib to help him along, and the two set out to explore the many worlds connected to GreatTree to win the tournament and rescue his sister.

DQM took the monster-taming elements of Dragon Quest V and expanded upon them, also borrowing a few mechanics from the Pokémon series and addressing the criticisms of that franchise, setting the standards for what would become the "Dragon Quest Monsters series." The basic concept is that Terry, as a young boy still too weak to fight for himself, must enlist the help of various creatures to act in his stead after being given a slime as a beginner monster. In order to win new monsters over to his side, Terry can lob cuts of meat at a foe during battle, which will raise the base chance for a monster to join significantly. Each monster will learn three abilities, possess it's own innate resistances to the elements and status ailments, and have a fixed level cap.

After beating Class F in the tournament, the player can breed monsters if they are at level 10 or above at the Shrine of Starry Night, which is taken care of by the current Master Monster Tamer. Breeding requires one male and one female monster and the result of the breeding will be an egg containing a Level 1 monster which has characteristics of both parents, including skills and stats. The egg can then be left in the monster farm or hatched on the spot, which costs a small fee. The newly born monster will have a plus number next to it's name, the number representing the improvement over it's stats over those of it's parents, the higher being the better. It costs more money to hatch a monster with a higher plus number. Also, the number beside the plus multiplied by two is added to the limit for the maximum level for the monster.

The ability to breed monsters is a direct answer to the criticisms of the Pokémon series, as it allows any species of monster to become a top-tier power house instead of being stuck with the limits assigned to it. Level and stat restrictions can be raised to any degree, strong resistances to all elements can be obtained, and up to eight abilities can be assigned to any type of monster with enough patience on the player's part, to the point that even a Burr baby can single-handedly tackle the final battle in the tournament by itself.

Once the Egg Evaluator is available for use, eggs can have the gender of the monster they're containing checked and changed. Both services require a small fee to the young woman, with the fee increases depending on the monster's plus number. 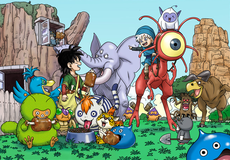 Pulio and the Monster Farm

A storage place for monsters not in the active party, managed by a little boy named Pulio, where they can be picked up or dropped off. There is an option to put monsters at the farm to sleep, which allows them to maintain their wilderness level and allows the player to keep an additional 19 monsters but they will not gain experience or grow in level unlike non-sleeping monsters who do. There can be 19 awake and 19 asleep monsters at any one time.

As the kingdom of GreatTree is rather small, Terry must venture out via the castle teleportals and explore other worlds to recruit monsters. These warp vortexes are called travelers' gates in the game itself, as was the standard Enix of America localization policy at the time. These gates lead to randomly-generated worlds based around set themes with a fixed variety of monsters assigned, and are located underneath the throne room. To access the portals, the player needs to defeat a class ranking in the starry night tournament. There are a certain number of areas in a given world, and at the last one the player needs to defeat a boss. Other gates are hidden throughout Great Tree, such as one in the library that is only accessible after befriending over 100 different monsters.

Players of other games in the Dragon Quest series will recognize many of the bosses and and their lairs as homages to the main series. Examples include the Golem guarding the town of Cantlin and the Dragon holding Princess Gwaelin captive in the Quagmire Cave (both from the original Dragon Quest). Some bosses in the game offer to join the player's party automatically, some have to be won over with meat, and some will not join at all.

The monster arena is how the representative of the kingdom is selected for the starry night tournament. There are eight ranks that consists of three different battles that must be won before the player can advance to the next ranking. Each rank provides harder challenges: the higher the rank, the harder the battle. The player is able to select ranks G through D in the beginning, and these battles open up teleportals to explore and are necessary to progress through the story.

These medals are scattered throughout different worlds and are randomly picked up. In the game, thee king of GreatTree pulls double duty as the requisite medal king, located east of the Monster Arena, and will give the following eggs for the cumulative number of mini medals brought to him in the original Game Boy game:

The game has also been remade for the Nintendo 3DS in Japan as Dragon Quest Monsters: Terry's Wonderland 3D. At this time, it is not likely to be released elsewhere in the world.

On September 13th, 2019 a surprise announcement was made through Square-Enix's social media accounts, revealing the game will be ported to the Nintendo Switch on September 17th. This new port has been dubbed Dragon Quest Monsters: Terry's Wonderland RETRO, and includes the ability to switch between monochrome and colored graphics, a variety of display boarders reminiscent of the Super Game Boy that also display the stats of Terry's monsters in addition to just the current HP and MP, and an auto-mapping feature that can be toggled on or off. The game is digital only, and costs just 1,500 yen.

A manga follow-up titled Dragon Quest Monsters + continues the tale of Great-Tree roughly one year after the events of the game. While the protagonist, Kleo, is an original addition to the setting, several veteran characters and monsters return.