This article is about the character. For the boss, see Terry (boss).

"Whatever you do in life, make sure you're winning."

Terry is a character in the Dragon Quest series that appears as a playable party member and boss in Dragon Quest VI: Realms of Revelation. He is a brash, arrogant swordsman who is encountered several times throughout the story, beating the party to various goals and reaping the rewards for himself before joining the Hero's party later in the game. As a child, Terry was the main character of Dragon Quest Monsters.

Terry wears a blue cap to cover his white hair, a blue tunic with matching gloves over a black undershirt, and white pants capped with black boots. The tunic is partially covered with a section of Leather armour, and he carries a satchel at his side.

Terry is the archetypal "lone wolf" in that he prefers to work alone and hates to depend on others. While he is not strictly anti-social, Terry is very condescending towards others and speaks in a terse manner. This bellicose attitude stems from his profound (and well hidden) loneliness, as shown in his Lucky Dip antics. That being said, he is still a good person at heart and is strongly implied to have saved several people from the jaws of monsters during his travels, most notably Donna the barmaid from Port Haven.

As a child, Terry is much more kind and social. Throughout his journey in the Kingdom of GreatTree, Terry is always willing to help those in need. Unlike his older counterpart, Terry is eager to and willing to make friends with his companions and rivals. In addition, Terry helps others out of kindness and compassion, rather than any thoughts of rewards and making a name for himself like his adult self would do.

Warning: Spoilers!
Click expand to view content
Terry is a talented swordsman, traveling the world to find more powerful weapons and to prove his strength. He is first met by the Hero, in the town of Arkbolt, setting out to defeat the hacksaurus terrorizing the cave north of town. Terry is able to reach the monster first and defeat it in battle. Later, he is met in the Everfrost Grotto where the Sword of Ramias is found. Terry decides to leave the sword for the hero though, since it is all rusty. Finally Terry must be defeated in battle before the Cloudsgate Citadel can reappear in the Phantom World. Once Dhuran, the boss imprisoning Cloudsgate Citadel is defeated, Terry will join the hero's party.

Terry initially goes on his quest to become more powerful, because he was unable to protect his older sister Milly while growing up in Felonia. She was taken away by the king's men to be added to his "collection" when they were younger, and Terry was left critically injured after stabbing the chief assailant during the abduction. Clinging to life, Terry escaped Felonia and swore to become the world's most powerful swordsman to save his sister. As the years grew longer and the battles more intense, Terry lost sight of his original goal, and doesn't even recognize Milly when he first sees her. Once Terry is defeated, he and Milly are reunited and reconcile.

After the heroes defeat the Demon Lord Mortamor, Terry and Milly finally reunite with their parents back home in Felonia. Depending on whether the bonus dungeon was explored or not, Terry will either notice the Liquid Metal Mind vocation scroll or engage Nokturnus in a solo battle, the outcome of which is not known. Afterwards, Terry will join his sister and the rest of the gang in observing the birth of the Zenith Dragon through Madame Luca's crystal ball. 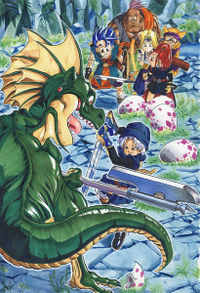 In the mobile device version, Terry joins at level 33 having mastered the Priest and Mage Vocation in addition to those listed above.

Terry notably has some of the most useful Lucky Dip actions in the game, potentially using Lightning Storm once he reaches rank 8.

Warning: Spoilers!
Click expand to view content
When Terry was very young, he witnessed his older sister Milly be abducted by a creature called Warubou to the distant kingdom of GreatLog. A few moments later, a similar creature known as Watabou appeared and took Terry to the kingdom of GreatTree. Terry only wanted to find his sister, but the king of GreatTree convinced him to become a monster tamer and win the Starry Night Tournament. The king stated that if Terry were to win the tournament, he would be granted any wish he desired. Terry then sets off to recruit monsters and explore the world. After Terry's monsters become powerful enough, he enters the tournament and ends up fighting against the monsters of the champion from GreatLog, who happens to be his sister Milly. After winning the tournament, Terry and his sister are reunited.

Terry's adult counterpart, as seen in Dragon Quest VI, is encountered a few times inside the final rooms of the gates. Although his identity is not revealed until his last appearance, it is hinted at through cryptic remarks made by {{NPC}]s that this mysterious individual happens to look like younger Terry does. Like in Dragon Quest VI, adult Terry is looking for the strongest sword to become the most powerful swordsman in the world. When conversing with his younger self, adult Terry is condescending towards young Terry for his usage of monsters rather than fighting opponents directly. This attitude changes into respect in the Room of Reflection where young Terry defeats Dhuran, a feat that adult Terry could not accomplish, releasing him from Dhuran's control in the process.

Warning: Spoilers!
Click expand to view content
Some time after the Starry Night Tournament, Terry makes a visit to GreatLog. He can be encountered and battled in the arena after Cobi or Tara breeds with all the NPCs and collects 150 monster types. If defeated, Terry offers to breed with the playable character, thus making the game backwards compatible with the original Dragon Quest Monsters. His team consists of Watabou, Dhuran and a Great dragon.

Terry is of Germanic origin, and means people's ruler. It is derived from the older name Theodoric.