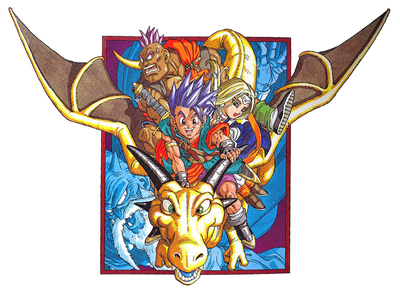 The mysterious dragon is an unofficial name for the unidentified, golden dragon that appears in Dragon Quest VI: Realms of Revelation. The details of the creature are never outright explained, but fans have pieced together several clues to hint at the dragon's identity.

The dragon taking flight in the SFC Version

The dragon appears along with the Hero, Carver, Milly, and Mortamor on the cover art of the super famicom version of the game.

Within the title itself, the dragon appears twice at Murdaw's Keep to fly the cast over the untrekable crags and into the castle itself. In both instances it is called forth by Milly playing a melody on her ocarina.

A golden dragon resembling the DQVI dragon appears as a flying mount in the game.

The dragon appears carrying each member of the DQ6 cast into battle at the start of their finishing moves and features directly as the focus of Milly's, assailing the enemy monster team with fiery breath.

Dragon Quest of the Stars[edit]

For simplification purposes, in Dragon Quest of the Stars, the mysterious dragon and the Zenith Dragon are one and the same in the Heavenly Golden Dragon event, and it takes the human form of the later in order to explain itself and the adventures of the heroes of Zenithia to the protagonists.

The dragon is speculated by fans to be the missing body of Ashlynn, based on several facts in the game:

"We Sorcerians have the power to detatch our souls from our physical forms. If we're blessed with enough magical might, we can even transform our bodies. Ashlynn the Acolyte has the blood of Sorceress Ashmerelda coursing through her veins. I bet she could turn into anything...even a dragon!"

The fan theory, accounting for these facts, is that the dragon is in fact the long-lost body of Ashlynn under the Morph spell, which cannot be learned by any of the party members in the game and is only known by certain monsters and Sorcerian NPCs. How this situation came to be is unknown.

Also of note are pieces of information from sources external to the game, including the following:

Connections to the Zenith Dragon[edit]

Later games have strengthened the connection to the point of implying this dragon to be Dragon Quest VI's incarnation of the Zenith Dragon outright.