Cloudsgate Citadel is a central location in the sixth game and a bonus dungeon in the remake of the third. In both titles it is a flying castle ruled over by a wise monarch known as King Zenith. Cloudsgate Citadel has a close history with Zenithia that is alluded to during the ending of Dragon Quest VI, and its presence in Dragon Quest III has lead to speculation on the connection between the Erdrick and Zenithian trilogies.

Cloudsgate Citadel was added to the game in the 16-bit remake released in 1996, and has been included in every port since. The layout of the castle is very different from how it is seen in the sixth game, being found at the end of a long bonus dungeon that make sup the floating firmament that it sits upon. The purpose of the location is to serve as the home of the dragon Xenlon, a divine being who is capable of granting wishes to any who can defeat her in battle--these wishes vary depending on the version of the game being played but reviving Ortega and being able to flip through a certain book are always present.

Cloudsgate Citadel is alluded to once Zoma is defeated by a variety of NPCs, included the chief researcher of Aliahan and the hint-giving prisoner of the same castle. It is accessed by walking through the pillar of light in the rear of the Castle of the Dragon Queen, which is stated to be the place closest to heaven in all versions of the game. Indeed, the flying castle is referred to as heaven by most NPCs.

The citadel is ruled over King Zenith and inhabited by humans, who welcome the Hero and their allies. A troubadour in the western wing of the castle offers powerful items as a reward for solving his riddles, being the Beast claws, Dark robe, and the Sage's stone. An eccentric hermit lives directly below King Zenith's audience chamber in a room the player must pas through in order to reach the summit--he is boiling a massive cauldron of stew and tells the player to sample some before confronting Xenlon. Upon doing so, the lead character's tongue is scalded and no effect takes place.

For more details on this version of the citadel, see Cloudsgate Citadel (bonus dungeon) 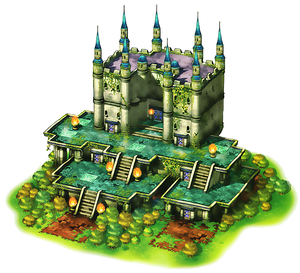 A former location in the Upper World, Cloudsgate Citadel was sealed away by the Dread Fiend Dhuran prior to the beginning of the game, and a giant hole is left behind in its place. Rather than being fully sealed in suspended animation as the areas target by the other Dread Fiends were, Dhuran merely sealed the souls of the inhabitants of the citadel and used the castle as his personal abode, where it becomes corrupted by darkness and takes to the air as a flying fortress. The Hero must gather four legendary artifacts and complete a ceremony at a shrine south of Madame Luca's home and east of Felonia--this will cause the castle to descend as a boss battle known as Stormsgate Citadel. The party will need to defeat the castle itself in battle in order to explore it.

Inside the castle, the Hero and his companions will need to engage Dhuran in battle to lift the darkness and restore the castle to its proper place. Once restored, the castle returns to its proper place on the ground and is once again inhabited by humans, although a slime loitering on the balcony has been turned into a little boy during the purification process. There is a large dragon egg tended to by the castle gardener is found in the lowest floor, which is said to be able to change the fate of the world for the better after hatching. After Mortamor is defeated and the upper world begins to fade away, Cloudsgate Citadel remains as the only part of it that can still be seen and, floating above the real world, it becomes the fabled Zenithia seen in Dragon Quest IV and Dragon Quest V. At some point between VI and V, the castle's inherent ability to float will fade away, making two golden orbs necessary for the castle to remain in the skies.

Though not stated directly, it is heavily implied that the egg watched over by the castle gardener and Ashlynn during the ending cinematic hatches into the Zenith Dragon, who becomes the guardian deity of the world. The egg's origins are also kept ambiguous, and any potential connection to the mysterious dragon is left to the player's interpretation.

The items that would become known as the zenithian equipment were not yet grouped together during the events of the game and have different names: the blade is called the Sword of Ramias, the chest plate is the Armour of Orgo, the shield is the Shield of Valora, and the helmet is the Helm of Sebath.

It is speculated that these armaments became associated with the citadel through the actions of the Hero, and would be seen as heraldry that signifies his bloodline. This would explain why the set is necessary to enter the Stairway to Zenithia centuries later in the fourth game, and it is possible that King Zenith himself implemented the strength-draining defence mechanism that prevents the unworthy from using the artifacts.