"A tiny medal. Gather enough and you can exchange them for incredible prizes!" 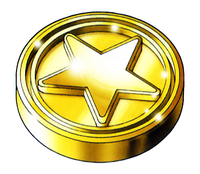 A mini medal is an item hidden throughout many Dragon Quest games. They are often found in chests of drawers, treasure chests, and other searchable locations. Collected mini medals can be exchanged for various prizes in the game in which they are found.

Mini medals only appear in the remakes of Dragon Quest III. They are collected by a man living in the well in Aliahan.

In Dragon Quest IV, mini medals are collected by a king who lives in Minikin's Dominion.

In the Nintendo DS remake, the number of medals and prizes earned was changed to follow the system used in more recent Dragon Quest games:

In the DS version it isn't possible to obtain the Gringham Whip until Chapter 6 as the Pioneer Town can't be completed until that Chapter. The Cell phone version of the game accelerates the completion of the town, thus allowing all prizes to be obtained before ending the main game/Chapter 5

Mini medals can be brought to King Dominicus in the southernmost island of the world. No version of V has adopted the cumulative system seen in later games and every prize must be paid for individually.

The Mini medal can be brought to Medford's Manor.

After the player defeats Gracos in Wetlock, the player is able to access the Medal King provided that they also have the Magic Carpet.

In Dragon Quest VIII, they are collected by Princess Minnie.

Captain Max Meddlin collects mini medals in Dragon Quest IX. He can be found in the north east corner of Dourbridge. Prizes are awarded after giving the captain a certain number of mini medals.

After the captain is presented with the 80th mini medal, he gives the player a Dragon Robe and the Capn's Curtsy party trick. Afterwards, the player can trade in any number of mini medals for whichever prize they choose, similar to V.

There are two people in the game that collect mini medals. A medal collector located inside Puerto Valor's inn, and Maxime Médaillé at L'Académie de Notre Maitre des Médailles.

The collector at Puerto Valor will only accept 20 mini medals; Maxime Médaillé will give you the L’Album de Médailles which is needed in order to progress through the rewards.

After completing the Album, subsequent mini medals can be turned for upgrade materials of the player's choice, assuming they have the correct amount of mini medals.

You can exchange your mini medals to Minimoggie . He is located in a cave in the north east corner of Castle Avalonia.