"Just one touch and you can feel this robe's incredible power."

The dragon robe (ドラゴンローブ Doragonrōbu) is a recurring robe in the Dragon Quest series that was introduced in Dragon Quest VI: Realms of Revelation. It is a truly incredible garment made from a dragon's scales and bones. The robe usually protects the wearer against fire and ice attacks and is often the strongest protection in the game for those who cannot don heavy armour.

The dragon robe is a flowing, verdant garment with puffy white sleeves. Golden armor with the appearance of a face adorns the chest area along with a neck guard.

The dragon robe has a defence bonus of +80 and reduces damage from breath attacks by 33%. It only appears in the remakes and can be equipped by Mages, Priests, and Sages. One can be obtained after turning in 85 mini medals to the collector in Aliahan in the mobile versions. In the GBC and SNES versions, dragon robes can be purchased from the fourth Pachisi track in Kol or randomly found in the fifth Pachisi track. 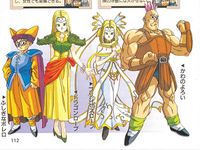 The dragon robe has a defence bonus of +95. It reduces frizz, sizz, bang, and breath attacks by 30. The Hero, Milly, Ashlynn, Nevan & Lizzie can wear it. The robe can be obtained in Greedmore Valley after the residents there are cured of their greed.

Interestingly, vintage art for the robe depicts it as a bikini of sorts despite male characters being able to wear it. Considering the robe was redesigned as early as the remake of DQIII, it is likely the feminine form was an oversight by Toriyama.

The dragon robe has a defence bonus of +95, a style bonus of +60, and reduces damage from all fire and ice-based attacks by 40. It can be purchased from the Sea Dragon for 40,000 gold and sold for 20,000 gold. The robe can be equipped by the Hero, Maribel, and Sir Mervyn.

The dragon robe has a defence bonus of +103, and will reduce frizz, sizz, bang, crack, and breath damage by 40. It can be worn by Jessica, Angelo, Morrie, and Red. It is received as a reward for beating Rank S at the Monster Arena.