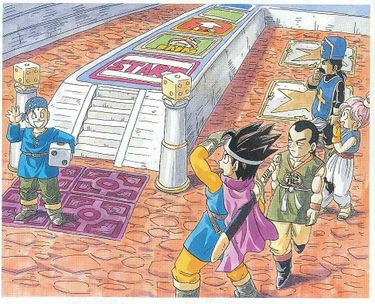 Treasures n' Trapdoors (すごろく, Sugoroku), formerly localized as Pachisi, is a minigame featured in several games of the Dragon Quest series. It is a board game that can be played by using a particular ticket item from each game. It often features beneficial prizes that can be used by the playable characters of the game. The game can be played any time with a T'n'T free pass.

The game is composed of an assortment of various tiles the character "token" must move around on, such as terrain, shops, hazards, and chests, that are navigated by dice "throws". Monsters can appear on the boards, the ones encountered determined by the level of the participant. Only the lead character can play the game: other teammates must wait at the start of the board.

T'n'T boards were not present in the original release of Dragon Quest III but were an added feature in the SNES and GBC versions. When the game was ported to android/ios devices in 2014, the development team was unable to adapt the boards to the program they had written and the feature was dropped.

There are a total of 5 boards throughout the world:

There are five boards throughout the world, in increasing difficulty:

Treasures n' Trapdoors appears in the game as a crafted item for decoration, requiring three freezia flowers, magic dye and a broken branch to construct. Adds +500 base level EXP.

"Treasures n' Trapdoors" is a play on the board game Snakes & Ladders.