The Damdara Desert is an open waste north of the ruins of Cantlin. Even more desolate than before, all traces of human habitation have long since succumbed to the elements and been swallowed by the shifting sands. Instead, a foreboding pyramid looms over the Builder from across a shallow river.

As it's name implies, this region is mostly desert. A menacing pyramid looms in the southwestern area. The ruins of the town of Damdara remain visible in the central part of the island. In the northeast side of the land, a small and calm island stands.

There are mineral veins all over the area, be it in rocky structures in the desert or in caves inside the mountains. Surprisingly, there is also a large amount of plants to gather.

In the northwest side, far behind the mountains a dragon rests on the plains. Around the plains, there are forests filled with monsters and materials.

An overview of the main points of interests and optional activities to do in this island: 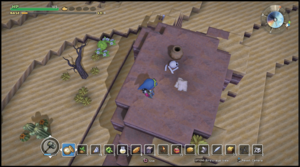 Someone's remains on the stone arch.

Between the red teleportal and the pyramid stands a stone arch. There's a note next to some bones, and pot on top of the arch. A seed of life can be obained by reading the note.

The pyramid is one of the main points of interest in this island. It is visited for story purposes, and is filled with cultists.

Besides the mandatory path, the pyramid holds two secret chests, one containing a Fireplace, and the other containing the Featherfall footwear, which cuts 100% of the fall damage. To find them, one must find and destroy a dirt wall inside the lower floor of the pyramid, near the stairs that lead towards the main room. To find the fireplace, simply follow the new path. The Fallfeather footwear are in a chest accessed by climbing some ivy.

In the area nearby the pyramid, Iron scorpions and Knight errants can be found. The former can drop an item necessary for forging the best hammer available in chapter 1.

Another place visited for story reasons. Only one building stands, a room that is used as a cell by Dragonlord's minions. In the nearby area there are some poisionous lakes; and some trees and ruined walls reminiscent of the town's better days.

A small separate island is visible from the northeast side of the Damdara desert. The small island is accessible by foot, as the water is very shallow over the sand connecting both islands.

Once there, the player can find a small hammerhood cementery guarded by a brownie. The grumpy brownie will tell the builder how to make memorials. With that knowledge, the builder can return to Hammerhood Heights, repair the graveyard near Clobberina's home and complete one of the chapter's challenges.

Far in the northeastern plains, a dragon rests. It drops a Fireplace once defeated. If the other two dragons found in the Ravaged Realm and Hammerhood Heights are also defeated, another of the episode's challenges will be completed.

The bigger stone golem can only be defeated with Wrecking balls, which can be made after visiting the Rockbomb Ravine. All other monsters can be defeated via regular means.