The Ravaged Realm, also known as Cantlin Plains, is the first area player explore in Dragon Quest Builders. It is the ruins of the former fortress of Cantlin, having been overgrown with saplings and debris in the century since the first game took place. This area is where the base for Chapter 1 is located. 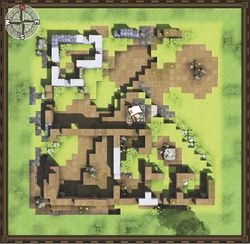 The town's starting look, from the top.

The landscape is a tutorial area that is specifically designed to get players accustomed to the flow of the game. Specifically, the nature of building, the passing of time, and the hunger meter are addressed directly once work on the base has begun. Combating monsters, as well as fighting off raids, will also be covered.

This island has vast plains around the town and in the southwest area, some forest areas, mountains across the whole island, and a swamp area in the southern part. In the plains and forest areas, some puddles can be found.

The town is almost barren when the player first arrives, but some structures remain. One of the first quests is finishing a room in the northwest for Pippa, the first npc to join the village.

The main building resource in this chapter will be stone and minerals, with many recipes requiring either. Despite this fact, the Ravaged Realm doesn't have many rocky resources, needing to import them from the other parts of the Cantlin region, like Hammerhood Heights.

The game's starting point. Rubiss awakens and guides the builder through a short tutorial. Once they are outside, she gives the protagonist a Banner of Hope.

The main base for Chapter 1. It's on the ruins of the original Cantlin from Dragon Quest I.

A cave where two drackys guard a chest that contains a seed of life. It's exact location changes from savefile to savefile, but it's always located to the south of Cantlin.

It's located southwest from the base, and chimaeras like to gather around it. There is a chest containing a seed of life, on top of it.

There is a field of flowers in the far southwest, beyond the mountains and chimaera tower. One of the three dragons needed for a challenge rests there. It drops a Comfy sofa once defeated.

Far in the south, beyond the mountains, lies a poisonous swamp. There isn't much to do, but some gold veins can be found in it.

Located south from Rollo's hidding spot, it's where the player must go in order to end the chapter.

If the player loads a finished savefile and then completes any remaining challenges, they can be claimed by finishing the chapter via Rubiss's teleportal.