The rolling hills of Hammerhood Heights are the second region the players can explore in Dragon Quest Builders. As the name suggests, it is populated by a large tribe of Hammerhoods that will teach the Builder the technique for crafting a basic mallet as thanks for a small favor. This area is accessed via the blue teleportal in Cantlin.

The island is home to a friendly tribe of Hammerhoods whose leader is Clobberina, a larger female hammerhood. She teacher the Builder how to make mallets in order to be able to break rocks and harder blocks to get more materials to work with.

The land is can be divided in three areas: a dirt mountain filled with coal and other minerals where the hammerhoods reside, a small grassy peninsula in the north, and a range of mountains and forests in the southern and western regions. Deep in the mountain range, past survivors from Cantlin made a fortress, but it's long gone.

Kenelm can be rescued from some monsters in the small peninsula in the northern area of the island. He later teaches the builder how to do charged attacks. 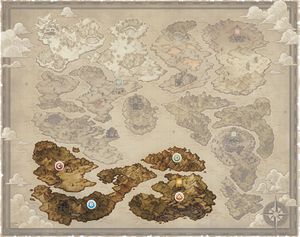 A list of side-activites to do while in the heights.

A present from a Hammerhood[edit]

In the nearest depression, a happy hammerhood will hint to building a path and taking a chest nearby. It contains a Seed of life.

Finding the map of Alefgard[edit]

From a friendly hammerhood warming himself at the fire, go north carefully by the edge of the cliffs. A small cave awaits, containg a treasure chest with a world map inside.

In another hole near Clobberina's home, lies a ruined hammerhood cementery. One of this chapter's challenges is repairing this resting place, however it cannot be done the first time the location is visited. In order to unlock all the needed recipes, the builder must travel to a hidden island in the north of the Damdara Desert. After talking to the brownie, the builder must return and build the needed stone memorials and place them down.

West from Clobberina's home, there is a earthy structure topped by a stone well. After breaking some blocks, the path inside should be opened. The treasure inside is the extra blueprint "The Greasy Mallet", which will allow the Builder to create a neat little cookfire cafe.

In another earthy structure three hammehood stand. Speaking with them will make them reveal how to make ladders to the protagonist.

In the central southern area of the Hammerhood Heights, there is a forest. Inside, two friendly hammerhoods compete against each other to see which one has the best garden, but one of them is winning by a landside. The other hammerhood wants the builder's help to copy the winning garden. To do so, the builder needs a shovel,which is learnt after having access to the Damdara Desert. Once the shovel is obtained, the player has to return to the gardens with at least: three milkblossom flowers (or buds), a coralily (or bud), a prickly peach cactus, three cactus trunks, two cactus crowns, sandwort, and a medicinal shrub. After finishing the job, one hammerhood will reward the builder with a bench, and the other with an additional blueprint: the Hammerton Hothouse. This blueprint makes a nice indoors garden.

The Talaria can be obtained inside a cave in this region. This accessory allows the builder to double jump. Their exact location changes from savefile to savefile, however they are always in the same area: the area surrounding the fallen fortress. In order to obtain them, the player must locate the randomly-generated cave with the remains of a man, and place a dirt block and a tombstone on top of the bones. Afterwards, the ghost of the Talaria's previous owner will appear and give them to the player as a sign of gratitude for buring him.

Atop of the fortress, a chest containing a chimaera wing awaits.

The second dragon needed for the challenge is located deep in the western mountains, much further than the fortress. It will drop the Dragon Scale accessory when defeated.