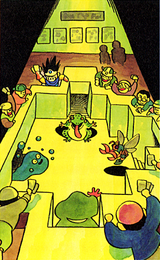 The Monster Arena is a recurring feature in many Dragon Quest games, especially the Dragon Quest Monster sub-series, frequently found as part of the Casino.

The DQM version allows the player to enter creatures he has raised in a fighting tournament; the Casino version calls on him to bet a number of tokens on a particular monster, then receives a multiplier (based on odds) of tokens back in winnings, which can then be forwarded to the next round.

The first arena is found in Romaria, complimenting the Roman theme to the kingdom. Arenas are also located in Isis, Manoza, and Cantlin. As casino tokens are not in III, players bet gold on their favorite and receive multiples of the bet based on the the winner's odds. New monsters are added to the randomly selected line up at level 10, 20, 30, 40 and 70.

Zenithian trilogy arenas are found in the various casinos, where players will bet tokens to exchange for prizes instead of money. The winning bet is multiplied by the monster's odds as before, with an option to bet the winnings on the next battle.

Slimopolis replaces the standard arena in VI, where in players can enter one of their bubbly buddies as a competitor. The fights consists of eight ranks with three battles each, for a total of twenty-four. A prize is awarded for each victory, and any completed rank may be challenged again for free (save for rank A).

The monster arena is located near Pickham, and is owned by Morrie. After completing his request to battle three infamous monsters, he allows the party to play in his pit.

In the 3DS version, Morrie will join the party as a playable character after beating Rank S and there is also a new rank to battle against. Rank S can be attempted immediately after the hero and party take care of matters in Arcadia as Morrie mentions needing time to get his friends to arrive.

Additionally, Morrie can't be leading the party when in the Monster Arena as he will be in his usual place and can only revive fallen monsters when at the Arena.

Unlike most games, the arena is a mandatory element in Dragon Quest Monsters. To qualify for the Starry Night Tournament, Terry must defeat his rivals in the arena and become the representative of GreatTree. The arena is located on the second-to-top floor of the kingdom (one floor below the castle) and can be accessed after Terry clears the Gate of Beginning.

While it is highly recommended that the player completes one class at a time, only three of the classes are required: Classes G, D, and S. All the other classes can be skipped if the player is able and wishes to do so. However, this risks the loss of breeding opportunities with NPC's so it is not recommended. Once a class is cleared, the player cannot compete in it, and any lower classes he may have skipped, again. At the beginning, Classes G to D will be available. After the player clears Class D (and the Gate of Anger afterwards), Classes C to S will be available. The third round of each class will be against a particular NPC the player is familiar with. These challengers are as followed: the principal, the doctor under the well, Teto, Master Mick, Teto, the tired guy in the restaurant, Master May, and the Medal Man.

In addition, the Starry Night Tournament takes place in the arena. It will be available after the player clears Class S and the Gate of Reflection. There is no fee to compete in the tournament. Even if the player loses the tournament, he can keep trying until he wins (just like the other arena battles).

After the player wins the tournament and returns to GreatTree, a new challenger will be available to battle in the arena. Unlike previous instances, there will be only one battle rather than three. The player can battle this legendary master as many times as he wishes.

The player will not be allowed to use items during the arena battles. Furthermore, he cannot give direct commands to his monsters. The only control the player has with his monsters' actions are setting their tactics to Charge (attacking abilities), Mixed (support abilities), and Cautious (healing abilities). The fourth option (which is usually chosen for giving direct orders) is replaced with a No Special option (which ensures the monster uses ordinary attacks rather than abilities). There is a higher chance for the monster to adhere to its given tactics if it has a low wilderness value and if its personality is correspondent to said tactic. Choosing the "Run" option will be considered a forfeit.

The arena in GreatLog can be accessed after the player clears the Oasis Key events. Only the Kids' Class is required to complete the game as its prize is required to progress. Afterwards, Classes C to S will be available. The player will obtain a Magic Key for clearing each class. Once the player clears S Class, he or she can compete in any of the four classes, which will have randomized and much more powerful opponents. The prizes for clearing these classes are random and of higher quality the higher the class. If the player's inventory is full, he or she will receive 6000 G instead. The battling rules are the same as in Dragon Quest Monsters. The fixed monster teams will vary slightly depending on the version.