Dragon Quest of the Stars

Dragon Quest of the Stars (星のドラゴンクエスト, , Hoshi no Doragon Kuesuto , commonly abbreviated as "星ドラ"[1])[2] is a free-to-play touch based RPG for smartphones that is part of the Dragon Quest series. The game was released on October 15, 2015 in Japan and globally on February 25th, 2020.[3] The new mobile title features stickers from popular LINE emoji artist Kanahei. On September 30th, 2019, Square Enix announced that the game would be released internationally in 2020, with a closed beta for Android users that ran from October 30th to November 28th. On March 30, 2021 Square Enix announced that the global game servers will be shut down on June 30, 2021.

In the Japanese version, players can explore other planets as well after finishing Chapter 7 of Season 1.

Players can customize and develop their own character to fight against the star crisis that draws near. Character customization is similar to Dragon Quest IX: Sentinels of the Starry Skies, in that armor is split between various categories: headwear, torso, legs, shield and accessories. Equipment and appearance aren't actually linked, players can use any piece of equipment they have as a cosmetic piece, with only one limitation: the weapon type has to be the same that is currently equipped.

After reaching a point in the story, players can also customize their vocation. The basic vocations are:

There's also the unlockable Gadabout vocation, which is a joke vocation but has great Luck and Evasion rate at lv99.

Specialist vocations have better vocational skills, better stats, and can equip teachings, which give two additional -usually passive- skills to the player. The advanced vocations can be revocated three times, which means they can reach up to level 3*99. Once revocated, a green flame icon with a number will appear next to the character's level. Unlike the base vocations, the specialist vocations are more oriented to filingl a certain role that can complement another vocation. For example, Paladins can guard Superstars with their Battle Buddy skill so the Superstar can use On Stage and reduce the party's charge times without worrying about getting hit and stopping the effects of On Stage.

In the Japanse version there are super vocations, each of which has a skill points panel similar to those from Dragon Quest XI: Echoes of an Elusive Age. Players can get skill points by doing specific things, like leveling a vocation up to X level, win a fight at Footsteps of Erdrick in multiplayer, or finishing Y amount of combats using the vocation. As with specialist vocations, each requirement is per character:

The super vocations can be revocated once, allowing a max level of 1*99. Each of these vocations gives the player a sigil when the player reaches max level with it. When using a super vocation ,a red star will appear next to the character's level. If it's revocated, a 1 will appear on top of the star. The first nine supervocations are even more advanced versions of the specialist vocations; while the later four have unique perks and habilities. Brave Knight allows players to access the main skills of 6 additional weapons aside from the equipped one -the skills are used in the order the player places them in the equipment screen-, Arcana Lord shows the element of enemy's charged skills and can give elemental protection to the party, Samurai can't equip shields but can equip a secondary weapon which can be swapped with the main weapon in battle; and Tactician can equip 6 additional weapons like the Brave Knight but can choose which skill to use.

Vocations aren't the only important thing affecting progress, weapons are the other big thing. Each weapon has one or two main skills (usually something unique to that weapon), and a series of sub-skill slots that allow you to use other skills as long as they are the same type of skill (there are 4: physical attack, physical support, magic attack, magic support), are allowed for that weapon type and are of the same rank or lower than the slot. Some special weapons have slots that are hybrids, being able to hold 2 types of skill.

Weapons, armor and skills can be upgraded for a stats and in the case of skills for reduced charge times. Gear can also be evolved up to four times using a duplicate or a weapon or armour jewel. Doing so increases the upgrade limit, and gives weapons better sub-slots for secondary skills. Weapons can be broken in order to extract their main skill and have that skill available to fill other weapon's sub-skills, if those slots are the same type and rank as the extracted skill. Some equipment can be alchemized and awakened.

Most of the game will be spent doing combats. In this game's battles, the player has to wait for the skill's timers to fill up before being able to use them. Each character does a simple auto-attack on each turn. Almost every vocation has 2 skills players can use in battle, like Anger, Sea Shanty, On Stage, Midheal, etc. After the vocational skills, both main and sub-skills for the character's equipped weapon are listed, and finally the shield's defending skill. The core mechanic is knowing the monster's weaknesses and using the skills in a timely manner, specially during the co-op multiplayer matches.

Before each dungeon begins, players can choose which items they are bringing into the battle (up to 4), and if they want to use food with special properties such as raising a specific resistance or boosting some stats.

Fight difficulty is divided in the following categories: Beginner, Advanced, Hero, Legendary. There are higher difficulties that require special one-time-use items to unlock: Giga-legendary, Fiend, Daemon and Archfiend. However, only one monster falls under the Daemon difficulty, and while there are several Archfiends in the Japanese version of the game, only one was available in the Global version prior to the End of Service: Emperor Xeylon. For some special bosses, there is an additional tier, accessed via Revelation keys, which is harder than Legendary but generally easier than Giga-legendary.

There is a casino in Dragon Quest of the Stars, the Squirrel Station. It offers these minigames:

All four casino minigames have normal and premium machines. The premium machines cost x3 the normal cost, but also have x3 higher prizes. These require a StarPass subscription* (*unavailable since March 31st, 2021 in the Global version), or waiting until it opens to everyone, which happens from time to time.

In the Japanese version, a Monster Arena exists too. It's a bit similar to the monster arena in Dragon Quest VIII: Journey of the Cursed King, however the monster parties in Stars have 4 party members instead of just 3. Players can raise an ever expanding variety of monsters and fight against the AI to progress through tournaments, or fight against the teams of other players using qr and text codes.

Another Japanese-exclusive feature is the Hero Training, which allow players to send characters from the main series to expeditions and gain experience to level up. The main purpose of leveling them up is to get "blessings" from the heroes, which give a small bonus to the characters who equips them.

The global version of Dragon Quest of the Stars was developed and operated by Koei Tecmo Games, and Koei Tecmo Singapore.

On September 30[4], 2019 Square Enix announced that the game would recieve a Global release and that it would have a closed beta test for the English version of the game on Android devices in Canada and Taiwan from October 30 to November 28, 2019. Game data from this beta test didn't transfer to the full game, but beta testers could get a commemorative in-game badge when the game actually launched.

The game finally launched globally on February 25, 2020, available for iOS and Android. It included five languages: English, Chinese, French, German and Spanish. Most stamps were translated in each language, except 4 which were kept in English, Chinese, French, German and Spanish regardless of which language you were playing in. These four stamps were the Hello, Thanks, See you later and Good game stamps.

The Covid-19 epidemic hit the development team early during development, leading into the content being released at a slower pace. The game had miscommunication issues between the development team and players, which lead to frustration on both parts. After the summer of 2020, Square Enix assigned a community manager to help improve the relationship between fans and developers. Square Enix held a few livestreams to detail new content and banners, and upcoming roadmaps. The live-streams also served as Q&A sessions where players would send questions to the CM via Discord and Reddit and he would show players the answer the developers had. The first live-stream was held on November 25, 2020; the second on December 16, 2020. The final livestream for the game was the 1st Anniverary Live-stream, on February 25, 2021.

From July 1, 2021, players were met with this in-app message until the servers eventually were shut down: 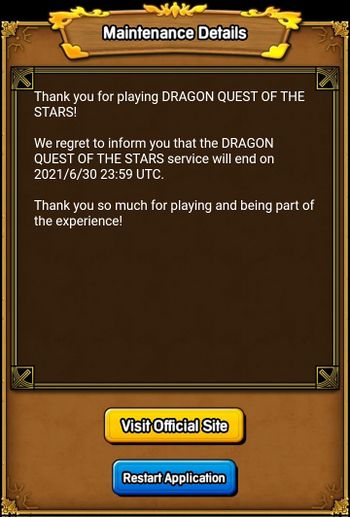 On October thirteenth, 2020 the game began a crossover with the Cell phone game Dissida Final Fantasy Opera Omnia. Features in the game include Mog and Manikins as bosses. Players could obtain a Mog suit and various accessories. There were also banners with equipment based on Cloud and Warrior of Light, and several other FF weapons such as Yuna's Magistral Rod.

Dissida Final Fantasy Opera Omnia players could get some DQotS stickers while the event lasted.

On August fourth, 2020 the game received a surprise crossover with the Godzilla series of films in a joint collaboration between Square Enix and Toho studios. The kaiju appearing in the game are the Hesei-era versions of Godzilla, Biollante, Mothra, King Ghidorah, and Rodan. In addition, cosplay equipment based on the monsters and the Japanese Special Defense Force have been made available as well.

On Janurary fifteenth 2021, a crossover event with Japan-only mobile game Monster Hunter Riders began. It featured classic beasts from the Monster Hunter series like the Rathalos, and a special crafting mechanic that allowed players to craft weapons, armor, accessories and sigils based on MHR characters, Felynes and monsters. There were several Monster Hunter-themed banners, offering the weapons and outfits of various MHR characters such as Halcion or Shino.

On 'Monster Hunter Riders, they had story events featuring Cyril and various MHR characters dressed as Dragon Quest series characters -like Mary using Alena's outfit-. These characters could also be pulled for. Certain monsters like Slimes or Sabercats could be obtained as partners for the players.

From December 15th to December 25th, 2020, the game celebrated the coming of Winter with an event called Winter Holiday. The event involved farming points for Santa, which were obtained by fighting him and his minions. He would offer the players gifts in exchange for points. Santa is a variation of Numen, and his minions were variants of other monsters like Healslime, Dracky and Sabercub, only with Christmas hats, reindeer horns and other festive decorations. These monsters could also drop crafting materials for Winter-themed equipment. During this event, Squirrel Santa could be seen in the Atlas, and the game offered a cosmetic banner.

Communication stamps in their ingame order.

Dragon Quest of the Stars