Monster Masters in Dragon Quest X
For the similarly named skill, see Monster Masher (skill)
A master of monsters, able to commune with them, wield their abilities, and win their affection. --Description in Dragon Quest VII

The Monster Master (魔物使い Mamono Tsukai) or Monster Master (まものマスター Mamono Masutā) is a recurring intermediate vocation first introduced in Dragon Quest VI. Also known as the Monster Masher (魔物ハンター, Mamono Hantā) in the seventh game, the vocation allows players to walk on the wild side and focuses on taming and making allies of monsters defeated in battle.

The M.M. suffers considerable reductions to their strength, resilience, HP, and MP in all versions of VI, befitting a starting vocation characters are not meant to spend too long in. Various breath skills are learned through the profession, in addition to the Puff! spell upon mastery.

With the job's upgrade to an advanced vocation in VII, the reductions to the mentioned stats are much less harsh, and enjoys a substantial boost to wisdom on top of a minor raise to agility and style. The Sony PlayStation version keeps the breath skills from before, but the Nintendo 3DS remake adds several support spells to give the vocation more utility.

In X, the M.M. is much more physically robust than before, boasting the third highest strength and fourth highest HP of all vocations. This is balanced by having a pitiful agility and having the bar-none worst MP available. The breath abilities are put aside in favor of skills that support their monster ally.

While the Hero of Dragon Quest V has attributes more akin to a physically stronger Priest, he is referred to in peripheral media as the legendary monster tamer and is the first protagonist in the series' history to be able to recruit monsters.

In the original version of VI, having a master in the party activates the chance that a monster will join you upon its defeat, however this function was dropped in the Nintendo DS remake in lieu of Slime Buddies. Monster Master is one of the prerequisites for the Ranger vocation (along with Merchant and Thief). 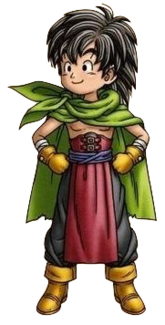 In VII the vocation will instead give players a greater chance to send defeated monsters off to the Haven, a wildlife preserve of sorts where monsters can interact with the party as NPCs. To become a Master, characters need to master the Thief and Shepherd vocations.

Appearance-wise, the costume of the Master looks the same for both genders, with a green cape, a purple sash tied about the waist like a belt and magenta pants, but the Hero is shirtless and has yellow gloves and boots.

The monster master was originally planned to be a playable vocation in IX, but this was scrapped at some point in development. The conceptual art depicts a boy wearing an outfit consisting entirely of animal hides and holding a gnarled staff.

The M.M. wields Claws, Whips, and Axes in battle, and possesses the exclusive skill tree of Monster Mastery (rough translation). This skill set focuses on:

Generally speaking, the protagonist of every game in the Monsters sub series is an M.M. Certain titles will place more emphasis on this profession than others, such as treating it as a societal class in it's own right. 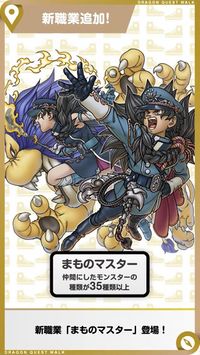 Monster Masters were added in a March 2022 update as part of the game's 2.5 year anniversary. Unlike the other advanced vocations, a character is able to become a Monster Master after befriending more than 35 types of monsters. Their weapons of choice are Wands, Spears, Claws, and Whips.

The basis of the manga is an exploration of what it really means to be a master of monsters, focusing on the bonds a tamer makes with their companions and how this strengthens the beasts will to fight.

The vocation's nomenclature was changed from 魔物使い to 魔物マスター in the DS remake of VI. The reason for this is presumably due to the removal of catchable monsters for slime buddies, and the original name was restored for the reintroduction of the vocation in DQX's version 2.00 update.