This page details the hero vocation that any character can attain; for the protagonists of each game, see Hero 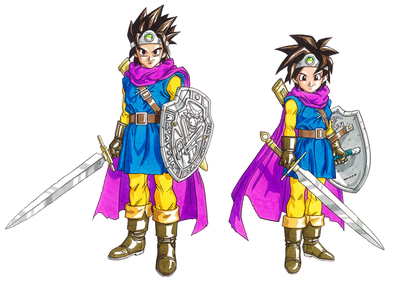 The Hero (勇者, Yuusha) is a character class in the Dragon Quest series.

The Hero is the most powerful class, bar none. A savior in times of strife, the Hero is able to turn the tide of battle and snatch victory from the jaws of defeat through their legendary durability and awe-inspiring skills. In addition to a +10% HP boost, the Hero naturally recovers HP at the end of each turn and can restore a colossal 500 HP at will through the Meditation skill at no MP cost.

Due to requiring the completion of intermediary vocations to unlock, the Hero is already equipped with a wide variety of skills to fulfill any role required of them. The Hero has near exclusive access to the incredibly powerful lightning abilities that scant few monsters can resist, though these spells and skills are offset by hefty MP costs. In III and the 3DS remake of VII the Hero will also be able to cast Omniheal, effectively giving the entire party a second wind and preventing a disastrous wipeout. Kaclang is also associated with the vocation, rendering the party immune to all forms of damage for a handful of turns and allowing players to observe a foe's capabilities while watching them waste MP.

The Hero vocation is available only to the Player themselves. It has access to incredibly powerful spells and equipment forbidden to other vocations, the former of which would serve as the foundation for appearances in later titles. The Hero enjoys superb strength and resilience, decent agility and luck, and substandard wisdom and MP.

The Hero class requires Gladiator, Ranger, Sage and Luminary classes to unlock, with one exception; The Hero only needs one of the four vocations to access this class.

The player can also obtain a Hero Heart from defeating The Almighty in 19 turns or less, though unlike Monster Hearts (or other Monster Vocations), the skills learned from mastering the Hero Heart do not transfer to other vocations.