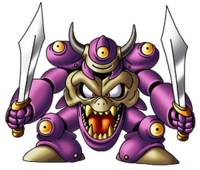 The Ersatz Estark is a monster class that is available in Dragon Quest VII. As the name suggests, it is superficially similar but unrelated to the infamous demon.

The Ersatz Estark is a palette swap of the Slaughtomaton. This class offers moderate to sharp boosts in all categories and drops in none of them. Upon mastering the class, characters will gain a strong resistance to all status ailments and elements.

In order to become an Estark, a character must first master the Rashaverak and Slaughtomaton classes. There is a very low chance of obtaining an Estark Heart from battling the monsters with the same name in Cave to Yet Another World