The game follows the Hero and his friends as they discover secrets about the mysterious islands surrounding their isolated home of Estard, the only land mass in the entire world. Through some ancient ruins, they are transported to the pasts of various islands that used to exist and must defeat evil in each new location.

The main flow of the game is different from the other Dragon Quest games; instead of exploring one large world, the party discovers sealed away continents and islands by placing stone shards into their appropriate pedestals in the Shrine of Mysteries. Once all of the missing shards are located and placed for a particular pedestal, the party is transported to the trapped location centuries in the past. After solving whatever problems plague the region, the party then travels back to the present. From there, they can travel via boat, carpet, or sky stone to the modern version of the location they just saved. These saved lands appear on the main map, although the originals (from the past) can only be revisited through the ruins.

Dragon Quest VII tells the story of a young hero, the son of a prominent fisherman in the village of Pilchard Bay on Estard Island, the only land mass in the world, and his friends in a fantastical, medieval-like world. They set out on adventures through the world's past and learn about its history. Upon discovering different lands in the past and solving the troubles, they reappear in the game's present-day map.

The party begins their adventure when the hero and Kiefer discovers a mysterious stone fragment of a map his father brings home from a fishing trip. Further investigations lead him to discover that the world he lives on, which seems to consist of only his small island, used to contain many continents that have somehow been sealed away. By placing found shards on pedestals in Estard's ruins, the Hero and his friends are sent to different lands in the past which the party eventually realizes. Once they solve the problems in the area's past, the land masses appear in the present.

After the world is restored, Orgodemir, the Demonlord, disguises himself as God and seals several of the islands away once again; this time Estard is sealed as well. The party sets out to revive the elemental spirits: Wind; Fire; Earth; and Water. Orgodemir is then revealed as the Demon Lord to the world whereupon he claims to have done so to trick humanity. Orgodemir then raises his Dark Palace and with the aid of the Flying Rock, the party confronts him in a final battle.

Returning from III, the boom town side quest has been reworked from a passive sequence to one the player controls directly. The Haven lets the player recruit people from various towns in the PSX version, which changes depending on the type of people living there (e.g. several merchants will bring more stores to the town). In the 3DS remake the system is dependent on Traveller's Tablets after a brief tutorial, and the culture of the settlement is no longer variable. Additionally, all the inhabitants of the haven are reformed monsters instead of mundane folk, with the syntax of their past life carrying over into their current persona.

The ability to talk with the party members in and outside of battles was first added to the series in VII, adding a great layer of depth to each party member and setting a standard that would be continued in future installments. Party members will offer advice about battle strategies, remind the player about important plot points, or simply comment on how they feel at a given moment when this feature is used. The use of this feature adds considerable personality to each character, so much so that party chat was frequently used as a marketing device for remakes of older titles in Japan.

The E.G.O. contests allow the player to compete for the highest stats, like the Best Dressed Contest from Dragon Quest VI: Realms of Revelation. Excellent equipment is awarded to anyone who can topple the reigning champions, two of whom are NPCs that can be found in the larger world.

The ability to catch monsters functions similarly to the Super Famicom version of VI, although they no longer participate in battle. Instead, tamed monsters are sent off to a nature preserve called Monster Meadows: here the monsters can be seen in their natural environment and be interacted with in the same manner as human NPCs. Blueprints are found to add new environs to the park, allowing space for nearly every monster. 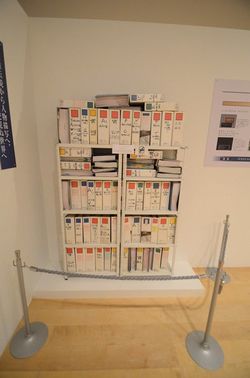 The infamous planning document for VII. Every line of dialogue, plot synopsis, character connections, item purposes, and battle details were written by hand over the course of development.

Dragon Quest VII was designed by series creator Yūji Horii and directed by Manabu Yamana. Shintaro Majima signed on as art director, while series veterans Akira Toriyama and Kōichi Sugiyama designed the characters and composed the music respectively. Horii has stated in interviews since the game's release that the team focused more on the puzzle solving aspect and the individual stories of the antiquated towns than the game's overarching story. For inspiration, the team pulled from the Old Testament of the Bible, incorporating several judeo-christian themes into the backstory and the scenarios of several plagued towns.

The game was officially announced in 1996 and originally planned for the Nintendo 64DD. On January 15, 1997, it was announced that development had been moved to the PlayStation. By the next day, both stock in Sony and Enix rose significantly in Japan. By 2000, Dragon Quest VII was predicted to be so successful in Japan that it would "create a 50 billion yen effect on the Japanese economy", said research firm DIHS. Dragon Quest VII would go on to be released on August 26, 2000 and sold 4.06 million games in Japan alone, becoming one of the highest selling games of all time and the highest selling title in the series until the release of IX in 2009. 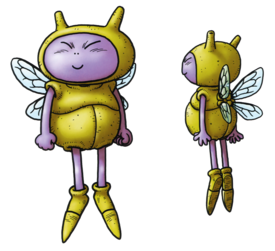 The attendant of the shrine of mysteries was created to make navigating the time periods and fragment finding easier.

The game was delayed numerous times before its actual release. Work on the game was extended because the development staff wanted to perfect the game due to high expectations from the fans, and because the team only consisted of about 35 people. Before its release, it was ranked as the most wanted game in Japan and Square, knowing about Dragon Quest VII's release, moved its Final Fantasy IX game to come out on a later date so as not to hurt potential sales. Being the first game in the series to include 3D graphics, the team was also initially reluctant to include CG movies and cinematics due to letters written to Enix by fans fearing that doing so would change the overall feeling of the series.

The English language localization of Dragon Warrior VII began directly after the game's Japanese release. Enix of America was tasked with translating over 70,000 pages of text via 20 translators and 5 copy editors, leading to an inconsistent script tone and several plot-holes. No effort was made to edit or censor the context of the Japanese script. The 2013 remake for the Nintendo 3DS was localized in 2016 under the title Dragon Quest VII: Fragments of the Forgotten Past. It was translated by UK-based localization specialists Shloc Ltd, and adheres to the tone and style set by the wonderfully silly Plus Alpha.

As with every Dragon Quest, Kōichi Sugiyama composed the musical score and directed all the associated spinoff soundtracks. As a first for the series, the original sound version was bundled with the symphonic suite in a two-disc set called Dragon Quest VII: Eden no Senshitachi Symphonic Suite + OST. The entire first disc and the opening song of the second disc consists of the symphonic suite, while the rest of the second disc is the original sound version. A disc titled Dragon Quest VII: Eden no Senshitachi on Piano was also released, and contained 27 piano-arranged tracks. The Symphonic Suite was later reprinted by itself in 2006.

VII was very well-received in Japan upon release. Dragon Quest VII won the grand prize in Digital (Interactive) Art Division at the 4th Japan Media Arts Festival in 2000, where the game was praised for being "...engaging without depending on a high degree of realism..." and "...well refined and artfully executed." The game also won four awards from the 5th Japan Entertainment Software Awards by the Association Computer Entertainment Supplier's Association (CESA), including Best Prize, Scenario Prize, Sales Prize, and Popularity Prize.

Sales of the North American version of Dragon Warrior VII reached about 200,000 copies according to The Magic Box, which was not nearly as stellar as its Japanese counterpart. Enix of America still expressed their satisfaction with the sales figures. Dragon Warrior VII met with mostly good reviews from North American critics. IGN noted that all "100+ hours" of the game are enjoyable despite the dated visuals and clunky presentation. GamePro questioned whether the game's package was nostalgic or just awful, but still gave it a decent score and called it a great game overall. GameZone.com praised the game's concept and nostalgia factor and cited it as "what role-playing games were meant to be." They also noted the game's high difficulty, which, instead of making the game frustrating, they say, "make it that much more of an accomplishment when you complete a quest." IGN described the game's class system as "one of the best class systems seen outside a strategy RPG."

Other critics were not as pleased with VII: GameShark.com described the first two hours of the game as "some of the most boring hours you will ever play in a video game." XenGamers.com also pointed out that in order to play the game, the player needs "the patience of a rock". Game Informer even went as far as to say that "four million Japanese can be wrong", referring to the game's immense popularity in Japan.

Because of the game's delay in being developed, its release was after the PlayStation 2's release, which created some negative feedback, particularly about the game's graphics. IGN commented on this, calling the game "a game that makes only a bare minimum of concessions to advancing technology, but more than makes up for this with its deep gameplay, massive quest, and sheer variety." Gamespot called the graphics "not good" and warned readers that if the "most rewarding things" they "got out of Final Fantasy VII were the full-motion video interludes, you definitely won't be wowed by anything you see in Dragon Warrior VII."

Since the game's release, the most notable and consistent points of contrition among fans have been the lackluster graphical presentation, and the exploitative nature of the vocation system. Of particular note is the abundance of redundant skills and spells available to the earlier careers (Focus Strength & Muster Strength, Shove & Heave-ho, Muscle Dance & Roundhouse Kick, etc), along with a distinct imbalance between the usefulness of spells compared to skills.

Changes in the 3DS version[edit]

The manga adaptation of Dragon Quest VII was published by Enix's Monthly Gangan in Japan. It was illustrated by Kamui Fujiwara, who also worked on another franchise-related manga, Dragon Quest Retsuden: Roto no Monshō. Fourteen volumes were released between 2001 and 2006, though the series is currently on hiatus.

In this adaptation, the hero is given the name "Arus". The manga follows the game story while adding in new characters and more detailed relationships, as the original hero was silent and a personality needed to be added for the comic version.