Dragon Quest Keshi Keshi (ドラゴンクエストけしケシ, Doragon Kuesuto Keshi Keshi) is a mobile puzzle game in which characters, monsters, and items from the Dragon Quest series become erasers and are matched in order to erase graffiti. "Keshi" is the Japanese word for eraser and often refers to collectible miniature figures in the shape of popular anime and manga characters. It was announced on May 27th, 2021 during a Youtube livestream celebrating the series' 35th anniversary, and started service in Japan on December 1, 2021.

A PC version has been announced for June 2022 in Japan[1]. This PC version will run on AndApp, a tool developed by DeNA that allows mobile game developers to port their games to PC with ease. 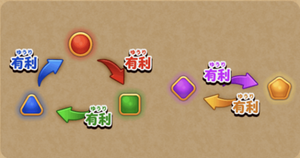 Eraser types and their advantages.

The game's official trailer began with drawings of a Spirit and a Bubble slime slowly being erased as more and more icons were matched. The gameplay is similar to match-three puzzle games such as Bejeweled or Candy Crush that were made popular in the early 2000s, and later in the mid 2010s.

The base gameplay is a match-three puzzle game where the goal is to defeat enemies, by swapping the placement of erasers and doing combos. By connecting 3 of the same unit, the player damages adjacent enemies. Doing a 4-line combo creates a line eraser, which can be either vertical or horizontal. Finally, combining 5 or more units of the same kind creates a skill eraser. Skill erasers can have a variety of effects like casting healing spells or unleashing powerful offensive skills, depending on the unit. For instance, an Archdemon will always use Kaboom, and a Pink sanguini will always cast Midheal. Line erasers and skill erasers can be combined too. Combining two line erasers makes them fire a line vertically and another horizontally from the spot they were combined in. Mixing two different skill erasers, unleashes both. Combining a line eraser and a skill eraser increases the width of the line eraser and unleashes the skill eraser. Finally, combining two skill erasers of the same kind creates a" remix", a powered-up version of the skill. For instance, the Archdemon's remix is casting kaboom from every archdemon eraser on the map, while the Pink sanguini's remix is casting a very powerful midheal spell that heals much more than two separate midheals.

Some stages have hazards, movement-blocking pieces, and moving spaces, to spice up the game. Boss erasers usually take up various spaces and can move freely over any hazard.

Scoring depends on combos, damage dealt and remaining HP at the end of the puzzle. If the player reaches a certain score -which varies depending on the puzzle-, a mini medal will be awarded to them. Gathering mini medals rewards the player with some consumables, and rare erasers and items. Each eraser has a type associated with it, and each is strong against one other type. Red has advantage over green, green is strong against blue, and blue deals more damage to red. The orange and purple types have advantages over each other. Type advantage equals doing more damage to the target, but they also impact the final score. Defeating enemies with their weakness usually makes scores skyrocket.

On top of that, each eraser can level up. Their max level depends on their rarity, with five-star units having a max level of 70. The eraser's level impacts its damage / heal multiplier, and its HP.

Like other mobile '"DQ titles, Keshi Keshi also uses stamina to limit playtime. The max stamina that recovers normally is 5, at a recovery speed of 1 heart each 15 minutes. Players can also get more stamina by buying stamina, receiving it from in-game friends, or beating new stages. Stamina can overflow, meaning it's possible to gather much more than 5 hearts, however stamina won't start automatically refilling until there are less than 5 hearts.

The service for this game will start on December 1st, 2021 in Japan. Still to be determined in the rest of the world.