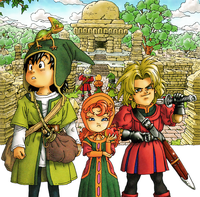 The three initial party members. From left to right: Hero, Maribel and Kiefer

The Party of Dragon Quest VII: Fragments of the Forgotten Past consists of 6 people who through the use of special Fragments seek to save their world while eventually taking on the Demon Lord Orgodemir.

This was also the first Party that plays could be made to talk amongst themselves through Party Chat debuting in VII, though being added to remakes of IV, V and VI