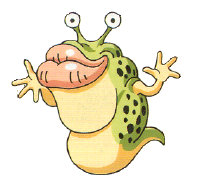 The Lips can join the party in the original version of Dragon Quest VI. It is one of the easiest monsters to recruit, requiring the player to reach rank 1 of the Monster Master.