The Party of Dragon Quest VI: Realms of Revelation start out with a Hero waking up from what appears to be a dream.

As he begins a journey at behest of the Goddess, he meets a man and eventually woman that he met in his dream.

The Party as it grows discovers various worlds including the Upper World, Lower World and Dread Realm, as well as threats such as the Dread Fiend Murdaw. 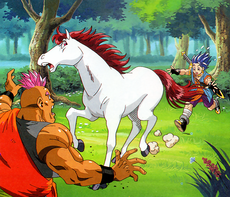