The metal king helm is a recurring helmet in the Dragon Quest series. It features an emblem of a metal king slime on the front. This helmet is frequently one of the most, if not the most, protective pieces of headwear in the game and occasionally offers protection against various status effects to the wearer.

The metal king helm has a defense bonus of +70. There is only a single one in the entire game, which can be found in a chest in Mt. Zugzwang. The Hero, Bianca, his son, Sancho, and Tuppence can equip it, as well as many recruitable monsters. It can be sold for 22500 gold in the Super Famicom version, and 15000 gold in the remakes, though as it is the strongest helmet for many characters it is not recommended to sell it. 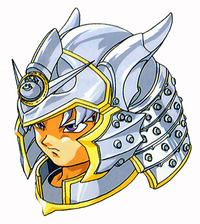 The metal king helm has a defense bonus of +70 and a style bonus of +38. Wearing it also protects from status and instant death attacks. The Hero, Carver, Amos, Terry, Lizzie, and all slime allies can equip it. Loss leaders have a 1/256 chance of dropping it. It is obtained from Medford's Manor after turning in 70 mini medals.

The metal king helm has a defence bonus of +55. Everyone can wear it. It can be sold for 10,000 gold. Princess Minnie gives it to you when you give her 90 mini medals. Wearing it increases resistance to Fizzle, Fuddle, Snooze, and Whack.

In this game, the helmet, along with the other pieces of metal king slime equipment, must be fully upgraded from their metal slime forms using Alchemy.