Generation I of Dragon Quest V: Hand of the Heavenly Bride sets up the story and introduces the main hero, Madason. 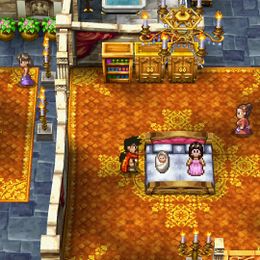 The birth of a Hero.

The tale begins in a castle with a man by the name of Pankraz waiting while his wife, Madalena, gives birth to their child. The baby is shortly born, with Mada suggesting that her husband names the boy. After the baby is named, Madalena mysteriously disappears.

The event turns out to be the dream of the young hero, Madason, who along with his father are on a ship that stops at the port, Littlehaven. From there, the two depart to their home in the village of Whealbrook, but not before a brush with some monsters, including Slimes.

Upon making it back home and reuniting with their friend Sancho, Pankraz and Madason are greeted by Mrs. Whitaker and her daughter and the young Hero's friend Bianca. The two women are in town to pick up medicine for the head of the family, Whitey Whitaker, but the herb maker is currently unavailable.

The day after both families are reacquainted with one another, Pankraz heads to the deep levels of the cavern Whealbrook Adit. Madason unable to follow, explores other portions of the cavern. During his exploration, the young boy finds the herb maker who is stuck under a boulder, but manages to push it off him.

As a result, the herb maker is able to produce the medicine needed for Whitey, leaving Pankraz, Madason, Bianca and Mrs. Whitaker to travel to Roundbeck village.