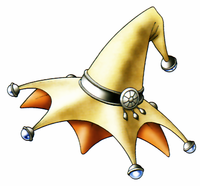 The magical hat is a recurring hat in the Dragon Quest series. It is a mid-level hat for spellcasters and features a design similar to the magical skirt.

The magical hat has a defence bonus of +25. It can only be worn by Jessica, as well as Red in the 3DS version. It can be purchased in the Argonian Bazaar for 2,700 gold and sold for 2,000 gold. Despite its name, it actually has no magical properties to speak of. The hat can be used as an ingredient for the Magical skirt and the Scholar's cap.