Dragon Quest IX (ドラゴンクエストIX 星空の守り人, Hoshizora no Mamoribito "Protectors of the Sky"?) is the ninth installment of the main Dragon Quest series, and the first to be initially released on a handheld console. The game was released on July 11, 2009 in Japan. It was released in July 2010 in both North America and Europe and August 2010 in Australia.

Dragon Quest IX continues the Dragon Quest tradition of turn-based combat, with a few modern twists. The game allows players to have a cooperative wireless multiplayer experience with up to four players.

The game includes a quest system. Quests serve as side-stories helping non-player characters around the game's world. Multiple quests can be performed simultaneously with some even interlocking and unlocking various stages in fellow quests. Early quests include gathering magical spring water, slaying monsters and stealing for a fellow thief. Unlike previous Dragon Quest installments, Dragon Quest IX contains many open ended mini-quests. Upon accepting a quest, the "Quest List" log is unlocked, which keeps track of all the quests the player has accepted or completed.

Unlike many other Dragon Quest games, the game includes only one save slot.

Warning: Spoilers!
Click expand to view content
Dragon Quest IX begins in the Observatory, the floating kingdom of the Celestrians, including the main protagonist, reside. The main character begins as the guardian who has just undertaken protection of Angel Falls, a human village. The Celestrians have been trying for some time to move into the God's Land. However, before they can leave, they require a fruit called the fygg. The fruit is very rare and Yggdrasil the "World Tree" it grows on must be empowered with benevolessence, which are obtained by helping people in the mortal world, known as the Protectorate.

By helping and protecting his/her town and earning their thanks, the main character obtains enough benevolessence for the World Tree to produce the fyggs. Just as the Starflight Express that will take the angels to the kingdom of God arrives, the Protectorate is attacked from below by a mysterious and powerful force. The force scatters the assembled angels and knocks the fyggs, the Starflight Express, and the main character down to the Protectorate. 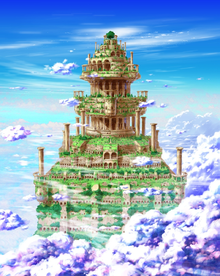 The Observatory
The main character awakens without wings or a halo and finds he/she has been rescued from the base of the waterfall in Angel Falls. As he/she comes to he learns a little about his/her fall and the great earthquake that happened at the same time. Having lost most of his/her Celestrian's powers, but not his/her memory or the ability to see deceased and magical spirits, he/she travels about trying to find a way back to the Observatory. During an adventure to reconnect his/her village to the nearby castle after landslides caused by the great earthquake, the main character finds the broken down celestial train and its faerie driver, Stella. Stella promises to help the main character return to the kingdom of angels if he/she can prove he is one.

As the main character travels the Protectorate in search of the fyggs he finds that the fruit have the ability to grant those who eat it any wish. Unfortunately, the wishes are not always fulfilled in the way they were expected and those who eat the fruit succumb to strange and demented ways. It is the hero's mission to travel from land to land, finding and battling those possessed by the Goddess Fruit's power. As he defeats their twisted form, the main character sets the possessed free and regains the fyggs one by one. After the hero collects all the fyggs, he/she return to the starflight express with Stella and head for the observatory. During the ride, Aquila enters the Starflight Express, and ask the hero for the fyggs. He/she refuses to give him the fyggs and Aquila battles you. You cannot strike him because Celestrians can't attack their superior and nearly kills you. The main character soon falls out of the starflight express and awakes in Wormwood Creek. He/she soon enter Wormwood Forest and meet Serena, who wants you to find a serene necklace she hid under the Guardian Statue. The main character soon finds the necklace and after retrieving it returns to Serena who agrees to break the seal blocking the entrance to the Borehole. Eventually, the hero learns that a Celestrian named Corvus is responsible for the attack on Yggdrasil and the Starflight Express, and defeats him.

Co-op mode consists of up to 4 Nintendo DS systems linking together using local wireless (similar to Pictochat) to play together. The 3 guests join the host system's world and can go anywhere which the host has explored. Guests are not required to stay with the host, but rather can wander wherever they like. Battles can be fought as a group with the host having the ability to summon the other players into a battle using the 'Call to Arms' command.

Guest players are given a special 'Watchers Wing' item which allows them to teleport back to their own world at any time except whilst in battle or cutscene. Players can leave multiplayer at any time by speaking to Pavo at Quester's Rest.

Dragon Quest IX features an online WiFi shop which can be accessed from Quester's Rest. This shop sells items and treasure maps which the player can purchase. The contents of the shop vary each week from player to player, so 2 different players will likely have different items for sale each week. Nintendo and Square Enix have used the shop to distribute special bonuses such as party members from past games appearing as guests in the Quester's Rest, such as Carver from Dragon Quest VI, and treasure maps which lead to caves featuring past bosses, such as Zoma and Dragonlord. The WiFi shop can be accessed by talking to Sellma at Quester's Rest. The WiFi shop is the only multiplayer mode that uses WAN internet rather than the DS-to-DS wireless. The service ended on May 20, 2014.

Tag Mode is Dragon Quest IX's passive wireless mode which is active only when the DS is placed into sleep mode. Tag mode is activated by speaking to Erinn at Quester's Rest and selecting the 'Canvass for guests' option. While in tag mode, Dragon Quest IX looks for other Dragon Quest IX games and exchanges data with them.

When data is exchanged, a clone of the main character from each game is placed in the other player's Quester's Rest. This cloned character holds an item which can then be received by talking to him/her. The clone then continues to stay in the upper floors of Quester's Rest unless dismissed by the player. Using tag mode like this, players can exchange various items including equipment and treasure maps with other Dragon Quest IX players.

Tag mode was wildly popular in Japan, breaking several records for most players communicating wirelessly while playing a video game. Treasure maps in particular were highly sought after as some were extremely rare with special items/equipment, while others contained excellent enemies for building levels. Tag mode, however, was dependent on the number of other Dragon Quest IX players using tag mode in any local area. 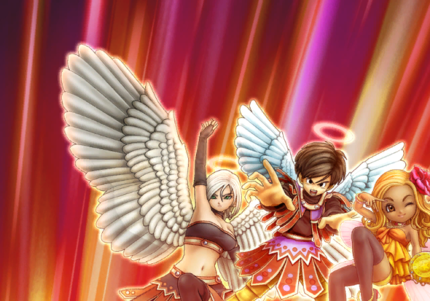 The Japanese release of Dragon Quest IX was subsequently delayed from 2007 to 2008. The company cited the need for more time to make a better game as reason for the delay. At the 2008 Tokyo Game Show, a new trailer was shown at the Square Enix booth which showed a glimpse of the changes made to the gameplay and graphics. At the end of the video, a confirmation of the release date (set for March 2009) was unveiled. Square Enix released another new trailer for the game, showing various aspects of the storyline, boss battles, along with cutscenes; the end of the trailer showed a then-correct release date for March 28, 2009, along with a price point of ¥5,980, which still stands.

On February 12, 2009, after having delayed the release of its quarterly financials by a week, Square Enix announced the game would be delayed once again to a Japanese release on July 11 of the same year. The game's release delay worried Final Fantasy fans, who were told by Square Enix president Yoichi Wada that Dragon Quest IX's delay may affect Final Fantasy XIII's release, stating that he "[could] not say there [would not] be an effect."

Dragon Quest IX was designed to be the hardest Dragon Quest game yet. The rationale is that, according to Brian Ashcraft, Night Editor for Kotaku, the Dragon Quest IX developers say "people can always find out information on the internet — like that's part of the game experience." In addition the game has only one game slot. Ryutaro Ichimura, producer of Dragon Quest IX, clarified the reason explaining that there is not enough space on the system for two traditional save-slots given the amount of freedom the game allows. Instead, the save area is used for a backup save-slot in case of battery failure.

Dragon Quest IX shipped with over 2 million pre-order sales. While the official release date for Dragon Quest IX was July 11, 2009, some retailers had already shipped orders; one such dealer asked its customers to not play the game until the official release date. In spite the large number of pre-orders and additional release shipments by Square-Enix, lines still formed for the release.

Within a two period the title had sold 2,318,932 copies out of an estimated 3 million copies that had been shipped. Some analyst say that 3 million may be too conservative and expect 5 million copies sold in Japan alone with large overseas sales expectations that could break previous Dragon Quest sales records. The sale is the largest post 2000 debut week sale which was previously held by the former title, Dragon Quest VIII.

On July 10, 2010, one day before the official release, Dragon Quest creator Yūji Horii visited the Nintendo World Store to commemorate the release of Dragon Quest IX: Sentinels of the Starry Skies in North America at a special launch event.

Excluding pre-orders, Dragon Quest IX: Sentinels of the Starry Skies has been the top selling DS game in the first two weeks since its release, according to Gamasutra and Amazon.com. It was the eighth best-selling game of July 2010 in the NPD charts, with 132,000 units.

Famitsu has scored the game with 40/40, the tenth game to achieve a perfect score. After its international release, it received high reviews, including an 87% on Metacritic.com and a user score of 9.0.

In the spanish magazine Hobby Consolas the game was scored on two occasions: the first time it received 96/100 and was reviewed by a journalist of the Nintendo department, the second time it received 93/100 and it was a mix of all the reviews made by the users of the game in the website of the magazine.