That Special Summon is a recurring skill in the series that activates a super-powered seance, bringing forth an incredibly powerful etheral entity to aid the party in battle. It is the supreme version of the Summon skill, demanding more MP in exchange for divine intervention. That Special Summon is strongly associated with the Druid vocation, usually the only means by which players can access the skill.

The four summons that can be summoned forth by this skill later appeared as monsters in Dragon Quest Monsters: Caravan Heart before returning to the series in the tenth game. 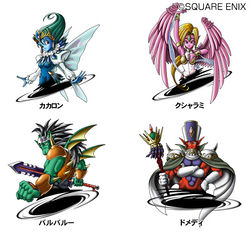 The skill is learned by reaching rank 8 of the druid vocation in both the original as well as the 3DS remake, and costs 20 MP. In addition, lucky players can use the DLC summon card items in the 3DS version as way to bypass the skill's normally steep requirements. These cards function as any disposable item in battle and are only good for one use.

Summoning was added to the game in the Version 4.0 update, along with the druid vocation. Due to the game running in real time instead of being turn based, summons are now limited to being on the field for 120 seconds and the skill itself has a charge time of 15 seconds. The four spirits may be selected at will by the druid, and only one may be active at a time.

Each spirits has his or her own distinct A.I., and now levels alongside the player. All four begin at level 50 as does the druid vocation, and can reach a maximum of level 99 as with player characters: once this is achieved, they gain a special boost to either their stats of part of their abilities. In addition, a spirit has a signature move that only they may learn.

Skills in the Dragon Quest series