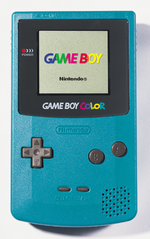 Game Boy was the first handheld developed by Nintendo. While the original system displayed games in black and white, the later Game Boy handhelds, Game Boy Color and Game Boy Advance, allowed for a color display.

The Game Boy Color is the successor of the original portable Nintendo video game system and was released worldwide in Autumn of 1998. It is notable for being the first handheld to feature a full 15 bit color palette, of which up to 56 colors could be displayed simultaneously. The system boasted a more powerful CPU than the original model, and is fully compatible with the original Game Boy's library. Games that are exclusive to the Color are packaged in a translucent cartridge, with black plastic cartridges in the same design as an original Game Boy game being playable on the first model with additional features unlocked on the successor.

The very first Color game was Dragon Quest Monsters, which was released exactly one day before the hardware itself was launched in Japan on September 25th, 1998.

Game Boy Advance (ゲームボーイアドバンス, Geemu Boui Adobansu) is a 32-bit handheld video game console developed and manufactured by Nintendo and released in 2001. It is the successor to the Game Boy, and was the Dragon Quest series's preferred handheld platform before the Nintendo DS.

(These three games can also be played on the Nintendo DS and DS Lite.)