The Mad cap is a rather unique headgear mainly found in the early entries of the Dragon Quest series that cuts the cost of spells. Its name is a pun based on the term "madcap".

The Mad cap is a wide-brimmed pointed blue hat of the same kind typically worn by wizards and witches in fiction. It has a band of yellow cloth around it with a red gemstone in the center. The hat's most distinctive feature is the series of eyes with vertical pupils with yellow sclera and either red or orange pupils running up the length of the hat.

The hat reduces MP consumption in battle by 25% (rounded up) and provides a Defence of +4 (+8 in the remakes.)

They are dropped by Tyrannodactyls, Pazuzu, and Hargon with a rate of 1⁄128, and at a rate of 1⁄16 by Liquid metal slimes in the remakes. Fortunately, each of the remake versions also feature a mad cap obtainable in a chest found in the Cave to Rendarak. It is the only helmet equippable by the Prince of Cannock and the Princess of Moonbrooke. 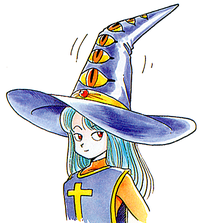 A female Priest wearing the hat. The Mad cap is characterized by a series of eyes running along the front.

The hat reduces MP consumption by 25% (rounded up) as before, and provides Defence of +8. They are dropped by Firn fiend with a rate of 1/128, and may be equipped by Priests, Mages, Merchant, Gadabouts, and Sages, as well as Thieves in remake versions. The MP reduction rate can be combined with the Glombolero for extra-economic casting. Because of the minuscule drop rate and the absence of any chests that contain the topper, it is strongly recommended to bring a thief when attempting to snag one.

Returning after a long absence, the Mad cap can be equipped by everyone except for Kiefer, increases defence by +8, style by +5, and now cuts MP costs by 50%. One can be found in the Cave to Another World and more can be acquired by winning them as prizes from the Lucky Panel at the Casinos found at Buccanham and The Haven.

In the 3DS remake, a superior hat called the Raving mad cap is available for the above mentioned characters. It increases Defence by +13, Style by +8, and cuts spell costs by 75%. Unfortunately, the game's programming does not allow this to stack with the Sage and Druid MP discounts due to only selecting the best reduction rate instead of adding them. The cap is available upon the first completion of the DLC Tablet True Steel by defeating the Überkilling machine

The Mad cap only appears in the 3DS port of Dragon Quest VIII, being available in the bonus dungeon, the Dragovian Path. It may be equipped by everyone, meaning that if the Hero has mastered his Courage skillset, he can cast Omniheal for a scant 14 MP. It bolsters Defence by +32.

In a 1998 interview, Pokémon creator Satoshi Tajiri revealed that his frustrations over obtaining the Mad cap were one of the main inspirations for the data exchanging feature his series would become famous for. To wit, he explained he felt a great deal of envy when his childhood friend (and Pocket Monster illustrator) Ken Sugimori managed to get two of them on his save file, and had absolutely no way to share the unneeded one with Tajiri.