The Dangerous bustier is a special piece of "armour" in the Dragon Quest series. It provides almost no protection, but can be upgraded into more effective bustiers via Alchemy.

The dangerous bustier only has a defence bonus of +1, but changes Jessica's appearance. Obtained after trading 99 medals to Princess Minnie, with another one being found in the Heavenly Dais. It is a required component of the divine bustier along with the shimmering dress or it can be sold for 2,900 gold. However, it is not recommended to sell it, as there are only two in the game. 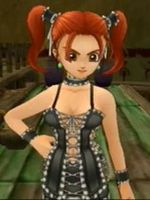