The shimmering dress, also known as the light dress or dress of radiance, is a recurring dress in the Dragon Quest series that first appeared in Dragon Quest IV. This radiant yellow gown sometimes reflects incoming spells, with the frequency depending on the title. Design wise, it has shifted from a loose-fitting robe to a regal ballroom gown.

The shimmering dress has a defence bonus of +90 and reduces damage taken from breath and magic attacks by 33%. It is the strongest piece of armor in remakes of the game, but it can only be worn by female characters. In the SNES/GBC remake, one can be found as a prize for completing the 4th Pachisi track (1st Goal) & more can be purchased from the 5th Pachisi track in one of the shops for 19,000 gold.

They can be found in Baron's Folly and Doorway to Nadiria. 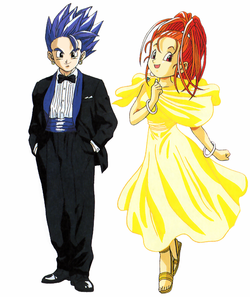 The shimmering dress has a defence bonus of +45, and a 33% reflection rate. It may be purchased in Gotha and Lofty Peak for 8000 gold.

This time, the dress is a reward for completing the Best Dressed Contest instead of being purchasable, and as such is unsellable. It provides +55 defence and +65 style, with a whopping 50% chance to reflect magic. Combine with a silver tiara and glass slippers for a massive +186 style boost for Milly and Ashlynn.

In this game, the shimmering dress has received a male counterpart in the form of the twinkling tuxedo. Reflect rate is 20%.