(Redirected from Green orb)
(For the Dragon Quest VII that originally was localized as Green Orb, see Green rock. 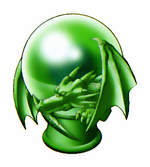 The Green Orb is a key item in Dragon Quest III. It is one of the Six Orbs required to hatch Ramia. It is held by a prisoner in the village of Tedanki.

The orb can only be retrieved at night when Tedanki's villagers are visible. It is held by a prisoner within a cell in the northern part of town. The prisoner is only accessible via the Final Key. During the day, the cell can be entered without the key and a note can be read near a corpse which hints that the prisoner has the orb.

The Green Orb is an important item that must be found by Dominico's residence in Arcadia before the final battle with Rhapthorne.

The Green Orb reappears in Dragon Quest IX as a very exotic alchemy ingredient, used for some of the highest alchemy recipes. It is a rare drop from Psaro, Estark, and (at certain level ranges) Nokturnus legacy bosses. The Green Orb is also given as a reward for the completion of quest 169 Competition Commission.