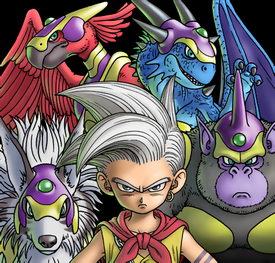 A wolflike forme incorporating the "spade" from playing cards in its name.

A birdlike forme incorporating the "heart" from playing cards in its name. 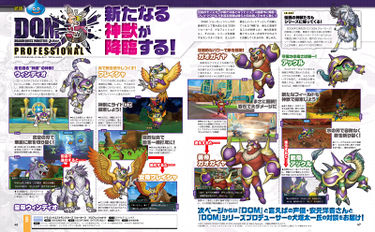 New formes of the Incarnus.

A simian forme incorporating the "club" from playing cards in its name.

A dragon forme incorporating the "diamond" from playing cards in its name.

A more sinister-looking forme of a wulfspade ace, having absorbed Darkonium.

Back to its wolflike forme, except now blue with a green horn protruding from its head.

The Incarnus makes its debut in this game. Throughout the storyline, it is revealed that the Incarnus must achieve its ultimate form in order to stop an impending catastrophe.

The Incarnus first appears at the peak of Infant Isle, where Solitaire unsuccessfully tries to scout it. It then appears in a cave in Xeroph Isle, battling an Orc and is badly wounded. The Hero witnesses this, saves the Incarnus from the Orc, and takes it to the nearby Scoutpost for healing, which is done so by Dr. Snap. The Incarnus joins the Hero at this point.

From here on, a secondary goal for the Hero (alongside collecting Darkonium crystals for the Scout Challenge) is escorting the Incarnus to the various shrines scattered throughout the Green Bays archipelago. At these points, the Incarnus will change into its various forms and reveal more about itself and its purpose to the Hero.

By the climax of the storyline, the Hero has fulfilled the requirements for the finals of the Scout Challenge. Here, the Incarnus is in its Wulfspace Ace form. In the final round, the Incarnus inadvertently insults Solitaire by calling her "Ginny Rummy", her real name, resulting in Solitaire attacking the Incarnus, getting disqualified and making the Hero the winner. Dr Snap escorts the Hero to his office to present him with the prize, the Mark which the Incarnus needs to fulfill its mission. However, Snap ambushes the duo, revealing his true malicious intentions and corrupts the Incarnus with the Darkonium orb, formed with the vast number of crystals collected by the participants. The Incarnus is changed into its Ace of Spades form, brainwashed into thinking its goal is to open the portal to the Dark World, a paradise for monsters, and leaves the Hero's party. When Dr Snap presents the demonic beast with the Mark, it senses that the item is a fake, a decoy left in a robbery that occurred previously. The Ace of Spades is able to sense the real Mark's location, however, and it and Snap takes off to retrieve the stolen Mark, leaving the Hero unconscious in the commissioner's office.

Later on, the Ace of Spades is found guarding the entrance of Tartarus in the dark depths of Infern Isle from the Hero. It engages the Hero in a boss battle. Upon its defeat, the Incarnus is cleansed of dark matter by the Hero's newly-acquired baryon sphere, and rejoins the Hero's party. The duo confront Dr Snap at the peak of Tartarus, where he is on the verge of opening the portal to the Dark World. Snap once again tries to corrupt the Incarnus with the Darkonium sphere but is countered successfully by the baryon sphere. These attempts render both orbs devoid of their power. In his reckless repeated attempts to overtake the Incarnus, Snap renders the Darkonium orb instable and unleash its dark matter onto himself, turning him into a monster, Dr. Snapped. Together, the Incarnus and the Hero defeat Dr Snapped and take back the Mark. The Incarnus is changed into its true form, Wildcard, and seemingly gives itself up to close the portal to the Dark World. Later, at the peak of Infant Isle, the Hero and the Incarnus are reunited, and the main storyline ends here.

While the Incarnus is not involved in the main storyline, it presents itself to the Hero during the post-game. To encounter the Incarnus, the Hero must interact with a mysterious blue seal that only appears at certain locations in each island during night, its presence indicated by the lack of other monsters present in the overworld.

During each of the encounters, the Incarnus will battle the Hero in each of its four adult forms. After the fourth victory, the Incarnus will reveal its intentions for battling the Hero: to ensure that he is worthy to be the Infantus's new master.

Interestingly, Solitaire has an Ace of Spades in her second battle team, alongside Dr Snapped (as an obvious reference to the main antagonists of the first Joker game).

The Incarnus makes a return in the Professional edition of the third game, with new forms that can be obtained by the player.