The Albatross is an airship in Dragon Quest Monsters: Joker 2. It acts as the home base of the hero throughout the events of the game, fulfilling a similar role to that of the Scoutposts in the previous title.

The Albatross appears as a large, blimp-like vessel that seems well-worn on both the inside and out, sporting plating at the front arranged to resemble a fanged grin and what appears to be a lightning bolt, sun, and storm clouds painted on most of its hull. The ship is owned and operated by Rex Mayday, the pilot and captain, and Rory Bellows, the engineer. The Albatross is held in high-esteem by the two, despite the ridicule it often receives on account of its appearance and performance.

At the start of the game, the ship is docked at an unspecified island and is about to head to Domus Isle in order to ferry its passengers, both human and monster, to the Monster Scout Challenge. The Albatross gets partway through this trip before getting caught in a bizarre storm that damages its engines enough to force it to crash land on an unknown island.

The disaster and resulting crash cripples the ship's flight capabilities and sends all of its occupants, save one monster in the monster pen, flying out into the wilderness. Though it can no longer fly, the ship is still capable of acting as a sanctuary from the monsters on the island and is used by the hero as a place to rest and regroup the passengers that were on route to the challenge. It also houses other facilities that the hero makes use of, such as a vending machine and the monster storage system, amongst others.

Upon the revival of the Divine Battler, Leonyx, the hero is able to employ the aid of Empyrea to carry the Albatross, along with its passengers, off the island and to the True Monster Scout Challenge. The damages the Albatross suffered are repaired sometime during this period off the island, and it eventually returns there and remains on the island for the rest of the game. 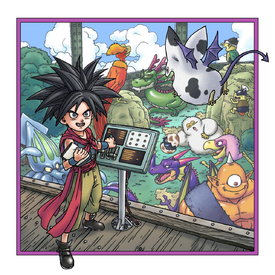 The innards of the Albatross consist of the bridge, passengers' cabin, hold, monster pen, and engine room, with noticeable absence of plating in many spots that makes the vessel's wiring and piping visible. The cabin holds an ATM for depositing and withdrawing gold, an item vending machine for purchasing items, and several benches for passenger use. The cabin connects to the bridge, hold, and monster pen, while the engine room connects to the hold and has a ventilation shaft that can be used to travel to and from the bridge.

An item vending machine is visible when entering the ship from the outside and can be used to purchase items. Both the vending machine and ATM are initially inoperable, but are fixed by Rory as the story progresses. Machine parts collected over the course of the game can be fed into a box next to the vending machine in order to increase its selection, though it will stop accepting parts to a point until clearing the game. Once the machine has its full selection of items, machine parts can continue to be given to it to lower the cost of the items to a specified limit.

The monster pen is where the player can access the storage system to add and remove monsters from their team and substitutes, as well as check their statistics and skill sets, rename them, distribute skill points, and release them. Dr Lump, a lump wizard, will take residence in the pen upon completing the Doubtback area and will help the player with synthesizing monsters.

Random monsters will appear and loiter about the pen, though specific ones can be shown one at a time by selecting them in the library. If the player selects a giant monster, a normally locked door will unlock and allow them to view the monster outside where there is enough space.

The area of the island where the Albatross initially crashes appears to be a part of the Treepidation region. It is a large enclosure inhabited by slimes and holding a few treasures that can be collected during visits. The hero awakens in this area following the crash landing and learns about battling and scouting monsters from Rory Bellows here as well.

After completing the game, king slimes will appear in this area at night and after winning the True Monster Scout Challenge, the player might encounter Eugene Poole for a battle challenge near a treasure chest on an elevation. He will then stay there until challenged and beaten.