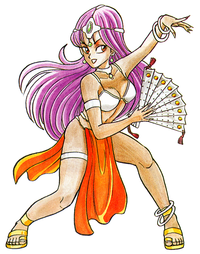 Maya utilizes fans in her performances

Fans are a recurring weapon type in the Dragon Quest series, and are most commonly associated with the Minstrel, Luminary, and Dancer vocations.

As a distinct category, fans are typically mid-to-high range weapons for less melee-oriented characters, such as Maya Mahabala. Though there were originally only a few individual fans in the series, the release of Dragon Quest IX has bolstered the stock by a considerable amount, and introduced several elements that distinguish a fan from its peers.

Fans appear in the 3DS version as one of the weapons that Red can equip and the only type that are unique to her. She joins the party with an iron fan equipped.

Fans may be equipped by Minstrels, Luminaries, and Martial Artists by default, as well as anyone who has mastered the skill tree.

Fans are the main weapon of Maya, dual wielding them and utilizing them in her flamboyant attacks.