Knightmare Towers is a tower in Dragon Quest V. It is the stronghold of Kon the Knight, a member of the Order of Zugzwang, who has kidnapped the hero's wife.

To access it, players must first receive the Talaria from Chancellor Jeeve's drawer in Gotha. Once used, it will take players to a neighboring continent, next to a church which is just south of this dungeon. This church has both an inn to heal and a priest who will save your game. Players can use the Zoom spell to revisit this church at any time once it has been entered.

The dungeon is notable for having two kinds of traps. The first one is a single room filled with spikes hidden underneath the floor that pop out of the ground once players approach them. Fortunately, they don't actually do any harm to the player, they simply block the path and are easily circumvented. This room contains a single chest with a Kamikazee bracer.

The other kind of trap are a corridor containing flame emitting statues towards the end of the dungeon, which, unlike the spikes, are extremely dangerous and will do large amounts of damage to HP. To get past them safely, players will need to push rocks in front of them, which can be located on a floor just above this corridor. However, some of these rocks are actually Rockbombs, so be wary. Note that if you are killed by these flame throwing statues, then you will be sent back to a man near the beginning of the dungeon who is looking for his brother, and you won't lose half your gold.

This area contains a Healing Spring. 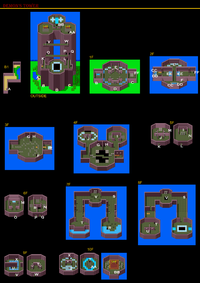