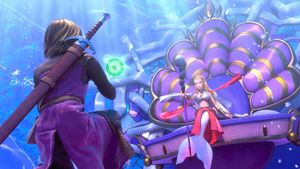 Queen Marina as seen in XI

The Mermaids are a race of women with the lower bodies of fish , who speak only in rhyme. Mermaids are typically fearful of humans, and for good reason--there is a popular myth that eating the flesh of a mermaid will grant the consumer eternal youth.

If one proves themselves to be a moral and decent person, however, mermaids will become fast friends. It is not unheard of for a mermaid to dive head over fins for a man she takes a shine to as well.

The Subtle Shuttle features a graceful looking mermaid figure as part of it's design motif. 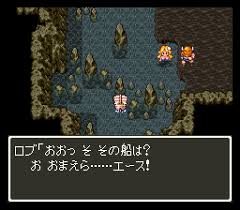 Mermaids are first seen basking on the surface of an colossal conch shell not far from Gent, and will dive into the sea when approached. Later on, the party will discover the secret romance of a mermaid named Unda and a wounded fisherman named Rod in the coastal village of Pescado. Explaining that his lover rescued him when his ship was destroyed in a massive storm and that the two have kept their love hidden from the people of Pescado out of fear of Unda's safety, Rod pleads with the party to escort Unda back to her home and states that he cannot bear to see her secreted away in a tidal cave just for his sake.

Once the party escorts the siren back to her school of kinswomen, her older sister Ova will bestow lorelei's Harp to the heroes as thanks. Astonished that humans would act so selflessly on Unda's behalf, the mermaids will no longer flee when approached and can be spoken to as normal NPCs. After the events of Cloudsgate Citadel are completed Rod can be seen in on the surface of the mermaid grotto, having made the journey after recovering from his remaining wounds and reuniting with Unda.

No mermaids appear directly in VII aside from the Water Spirit herself, but the Mermaid moon accessory plays a part in earning the Magic carpet. The manga did, however, show a mermaid as part of a flash-back sequence.

Warning: Spoilers!
Click expand to view content
During the events of Buccanham it is revealed that the Hero's mother was transformed into a mermaid by Scoober, the king of the ocean. This process was to allow her to wait for the revival of her lover Sharkeye, sealed in a glacier by the Demon lord. She will return to human form once a year and presumably only age during that period. In order to spare the life of her unborn son, the hero was carried several centuries into the future to a woman named Pearl on the island of Estard.

Mermaids play a large role in the game, with their queen Marina granting the party the Green Orb during their visit to Nautica. Marina is a clairvoyant and will guide players on where to go next when asked. During the events of the second act of the game, she also provides safe haven for the Luminary when he is temporarily stripped of his powers.

Aside from her highness, the mermaid named Michelle is the siren players will interact with the most. She dwells on a sandbar named The Strand, which the party is automatically dredged upon after passing through the channel of Puerto Valor. The party is shocked to see a mermaid in the flesh, and Michelle explains that she is waiting for Kai, her husband to be, to return from Lonalulu to her for their wedding. The Luminary volunteers to deliver this important reminder to the man and, after saving the island from a dangerous Tentacular, learns that the man Michelle knew has died of old age after being shunned by the superstitious villagers.

His grandson still lives, however, and after some negotiation by the party agrees to speak with Michelle after she swims to Lonalulu herself. Acknowledging the fate of her lover after seeing his tombstone, Michelle laments the brevity of human life compared to her people's 500 years, and sheds her scales for legs. Walking upon the beach, she kisses Kai's tombstone and returns to the sea, dissolving into foam. Upon returning to The Strand, the party will find Lorelei's Harp and a message left by Michelle that grants them passage into Nautica.

Mermaids appear as inhabitants of the world of water, being familiar with humans but still skittish about them. One will dance for Iru or Luca if they bring a team of monsters that has a HoodSquid in the ranks, and either of the siblings will be brought under the sea to speak with the Queen about raising the fallen sea level.

In the 3DS remake, a mermaid will randomly surface to challenge the player to a match when coasting over the waves. Their Queen can be challenged as well in her palace, and will reward the player with a random monster egg of high value if bested.

The relationship between the supple mermaids and the fish-faced Merman enemies, if any, has never been addressed in any game. Amos has speculated about the two species in Party chat while exploring the Seabed Shrine, but was unable to draw any conclusions.