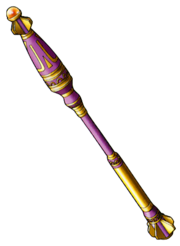 The Magical Mace is a recurring weapon in the Dragon Quest franchise. The staff is famous for reintroducing the concept of wands draining magic points upon striking enemies to the series, after the Staff of antimagic lost this trait after IV.

The magical mace has an attack bonus of +79, and has a 25% chance to drain an enemy's MP upon contact.

By mixing the mace with an Astral Plume and an ingot of Mythril Ore, players can create the Mega-Magical Mace.