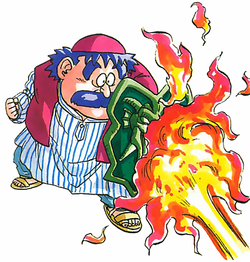 Shields are recurring type of equipment, appearing in every installment of the Dragon Quest franchise. Equipped on the offhand, this helps reduce damage from physical attacks, and many shields provide protection against elemental damage. Starting with Dragon Quest X, shields were differentiated into regular shields and greatshields (大盾, Ōdate, greatshields), which are heavier and more protective shields that only more powerful characters could carry.

In the original game, there are only three shields available; the strongest being the silver shield.

There are a few shields, and all can be equipped by the hero. Only two could be worn by the Prince of Cannock though; the Princess of Moonbrooke is sadly out of luck.

The selection of shields were considerably expanded in this installment. While the Hero, Warriors, Thieves, Priests, and Sages could use most of them, the best shields were only for the hero and warriors, and the remaining classes had a much more limited selection.

Every character except Alena could use some shields, however most are restricted to the Hero, Ragnar, Torneko, and Kiryl.

Nearly all human characters and most monster companions can use some shields. For the most part, though, the Heavenly Brides and the Hero's Daughter have a very limited selection. Debora is an interesting exception: the only "shield" she can use is the floral parasol.

All six characters are able to equip shields, but Maribel and Ruff are much more limited in their shield selection, being only able to equip more lightweight shields.

All six characters can use various types of shields, however some are restricted to certain characters. However, the metal king shield, the strongest shield in the game, can be equipped by all characters.

Shields now have a distinct list of skills associated with the group, complete with it's own vocation mastery bonus. Every vocation except martial artist, thief, gladiator, and ranger can equip a shield, and once a character masters the shield skill, they can wield shields even in any vocation.

The mechanics of shields were changed in this installment. Not only do they provide less defence than in previous installments due to defensive gear being split into six categories, they now also have a Block Chance rating that determines how often the character can outright block any attack (including magic). This chance is independent of the regular Evasion stat, though it fundamentally works to the same effect.

Shields are much more limited in this installment, since they can only be equipped by the Hero, Serena, Sylvando, and Hendrik, while greatshields are only usable by the Hero and Hendrik. All four characters are able to forego the usage of a shield if they equip a weapon in the offhand or if they use a weapon which uses both hands, such as a greatsword or whip. Hendrik is the only character with a skill panel dedicated to shield usage.