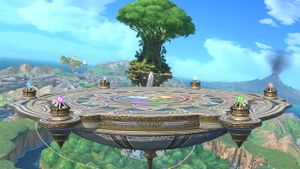 Yggdrasil's Altar (天空の祭壇, Tenkū no Saidan, Altar of the Skies) is a playable stage in Super Smash Bros. Ultimate. Hailing from the Dragon Quest series, it serves as Hero's home stage, and comes with him in Challenger Pack 2.

The stage starts off on the ground, with a giant platform that soon rises and flies around in the air with the help of the Six Orbs, traveling across the skies. Occasionally, other platforms will appear as well, and treasure chests can sometimes spawn on these platforms. Attacking treasure chests yields an item from it, but occasionally, a Mimic will attack instead, and defeating it will yield an item as well. Slimes (and, rarely, liquid metal slimes) and Tockles can appear on the platform as well, and Cetacea can be seen flying in the background. The entirety of Erdrea can be seen from the skies, though the stage also passes by specific locations, such as the tree itself, Arboria, and Havens Above.

There are eight music tracks for the stage in total, with two tracks coming from each game represented by the Hero's alternate costumes.