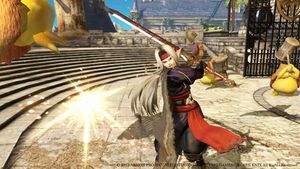 Greatswords can be equipped by Warriors, Gladiators, and Monster Masters.

The Hero and Hendrik can both use greatswords. They are two-handed weapons, requiring the wielder to forgo a shield. However, they have a "Parry" property, which causes them to sometimes block an enemy attack like a shield. Greatswords are also the strongest weapon class in terms of raw physical damage.

Cesar has taken over duties as the main wielder of greatswords, with Psaro only being playable in co-op bonus dungeons.