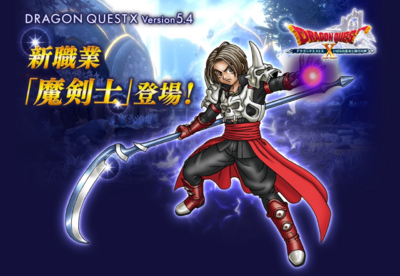 The Demon Swordsman (魔剣士, Makenshi, lit. Demon Swordsman/Fencer) is a vocation added to Dragon Quest X in the Version 5.4 update. It is an offensive vocation that empowers themselves with darkness in battle to unleash strong attacks on foes.

The design of the vocation is based on the humanoid form of Psaro that debuted in the Sony PlayStation remake of Dragon Quest IV, wearing black and red clothing with bone armor and wielding heavy weapons in battle, along with powers of darkness. Makenshi has also been used in some games in order to differentiate the humanoid version of Psaro from his green demonic form.

The demon swordsman's unique gimmick is their Wave Gauge meter, which fills up as they deal damage. At the beginning of battle, it starts out halfway filled and a total of 12,500 damage must be dealt in order to completely fill it. When the gauge fills, the demon swordsman is able to empower themselves with Dark Veil, which grants a damage boost and reduces damage taken from enemies. Some abilities are only usable after activating the Dark Veil. They are also capable of using Disruptive Wave in order to nullify buffs and stat changes on enemies.

Unlocking the vocation requires the completion of a sidequest and, like all vocations introduced after Version 4.0, they start out at level 50. Demon swordsmen are capable of equipping one-handed Swords, Greatswords, Knives, and Scythes. They can equip heavy armor and greatshields.