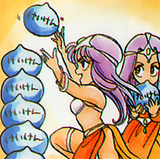 Experience Points, usually abbreviated as EXP, are a recurring feature of the Dragon Quest series. Experience Points have been present in every main series game and nearly all spinoff games.

When a character accrues a specific, predetermined number of Experience Points, they will "level up" (that is, gain a level of experience) and receive statistical increases particular to their overall character type. In most games, this is characteristic of the party member, though in Dragon Quest III: The Seeds of Salvation and Dragon Quest IX: Sentinels of the Starry Skies stat growth is dependent on the character's class.

Also, the King of Burland grants Ragnar McRyan some experience points at the end of Dragon Quest IV Chapter 1.