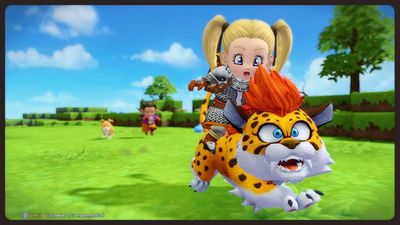 The Builder being taken for a ride by a great sabrecub, Malroth and dog in pursuit.

Animal transport is a feature introduced to the series in the first 3D title, Dragon Quest VIII: Journey of the Cursed King.

Traveling via horseback or by being carried by a monster allows the player to traverse terrain much more quickly than on foot, but typically does not grant access to new areas of the world map that standard vehicles do.

Characters such as Ramia and Cetacea, while technically being animals, allow the player to reach nearly all areas in a given game and have influence on the plot's development as well.

The Hero can ride on the back of a mighty Great sabrecat on all major continents whenever he rings Baumren's bell. The chime is the reward for completing the Chateau Felix sidequest, and the only places a sabrecat cannot be summoned are Empycchu and the Dark Ruins. due to both being plot-restricted islands.

Horseback riding is a main feature of the game, with a steed being summoned from any horse bell the Luminary rings. A horse can gallop at a steady pace or sprint at full speed, bowling over small-to-medium sized monsters that would be repelled by the Holy Protection spell and vials of Holy water. Additionally, the city of Gallopolis holds an annual equestrian competition that the player may compete in to win prizes. In the Nintendo Switch version of the game, running over a monster gives the party 30% of the experience they would have gained had they defeated the monster normally. Gold coins and treasure cannot be obtained through this method, however.

There is a variety of monsters that will give the party a lift once they've been defeated as well, and each one has a different ability that can be used to solve puzzles or reach new areas. In addition to those listed below, each pallet swap of a monster will perform the same functions.

Several tamable monsters can be used for mounts, such as the Great sabrecub, and many have additional abilities such as double-jumping or being able to ascend to a great height for the Builder to then glide from with the Windbreaker cape.