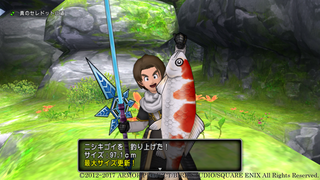 It works differently on a per game basis, but the basic mechanic consists on using a fishing rod on water areas to obtain fish or items.

In Dragon Quest X, the player needs a rod and lure in order to fish. After obtaining the first set from the mechanic-unlocking quest, basic rods and lure become available at certain item shops.

Fishing is done through a minigame that resembles both a battle and the fun-size forge minigame from XI.

Fishing can be performed by using the fishing rod tool, first introduced during Rimuldar's chapter. Fishing is useful for obtaining ingredients for food and medicine, like cod, salmon or squids; as well as for materials like slime skin.

The pool of possible catchable species and items vary from island to island, and from water type to water type. Fishing is performed through a small action minigame which required the player to hit the action button when the catch eats the bait.

Like in X, players can also fish monsters and items in addition to fish.

See also Fishing (Dragon Quest Builders 2).
In order to fish, the player must purchase the DLC on Switch and PS4, or play on Steam and Xbox/Gamepass, as the DLC is included directly with the base game on these platforms.

Like in the first game, location and water type dictate the species the player might catch, but environment type and shadow size also influence the available pool for a specific location.

In this game, only fish can be caught by fishing. All the fish have three possible sizes: standard, big, and whopping great. This is reflected on the inventory with the amount of stars the fish has, and depending on the species it might change the result when cooking too. It also influences the size the fish's model will have when placed on the world.