The sun crown is a recurring piece of headwear in the Dragon Quest series. This high-level headgear guards against many status effects and enemy attacks, including confusion, sleep, and the Kamikazee spell. 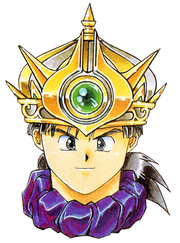 The Hero wearing the Sun crown.

The sun crown has a defence bonus of +60 and renders the wearer immune to Kamikazee. It can only be worn by the Hero. It is found in Mt. Zugzwang.

The sun crown appears in the 3DS version of the game. It has a defence bonus of +52, a style bonus of +35, and can be equipped by any character as long as they are level 35. It also immunizes the wearer from the effects of sleep and Kamikazee. It is dropped once by the darkonium slime boss in the Kooky Keep DLC Tablet.

The sun crown has a defence bonus of +52 and the now standard immunity to Snooze and Kamikazee. It can be worn by the Hero and Jessica; in the 3DS port, Red and Morrie can equip it as well. It is made in the Alchemy Pot and can be sold for 37,000 gold.

Although it is a powerful helmet in its own right, it is considered more valuable as an alchemy ingredient to be mixed with a Tough guy tattoo and Magic beast hide to create the Timbrel of Tension. In the original PS2 version, only two Sun crowns be obtained since there were only two Skull helms. In the 3DS port, an extra Sun crown was added into the game, being available as a reward from Cameron's Codex for completing the Archdemon stamp card.

The Sun Crown is an S-rank armor that can be acquired as part of the limited Dragon Quest VIII event by clearing stages in Monster Arena Battle Road II in the Grand Champ Odyssey. It has an defense bonus of +8, an MP bonus of +14, a Confusion resistance bonus of +10% and has three slots for Alchemy Effects.