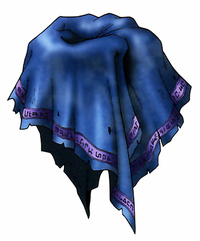 The dark robe is a recurring piece of clothing in the Dragon Quest franchise. It's a special cowl with a midnight blue dye, and is typically worn by thieves and allows them to blend in with the shadows, increasing evasion.

The dark robe has a defence bonus of +74 and increases evasion by 25%. It only appears in the remakes and can be equipped by Martial Artists, Gadabouts, and Thieves. One may be found in Cantlin and another in the fourth Treasures n' Trapdoors track in Kol. The dark robe can be sold for 12,375 gold, but it is not recommended to do so as there is a limited amount in the game.

The dark robe has a defence bonus of +55. It can only be worn by certain monster companions, and reduces frizz, sizz, woosh, and crack damage by 20 points.

A jet-black robe that makes it easier to dodge enemy attacks.

The dark robe has a defence bonus of +87, and raises evasion by 25%. It can be worn by Yangus and Morrie and sold for 10,500 gold. It is obtainable through a few means, including:

The dark robe can be upgraded further to increase the wearer's ability to dodge attacks, like a bat in the night.