Difference between revisions of "King Lorik"

"Scion of the bloodline of Erdrick, hero of legend! Long have I awaited thy coming! In days of yore, thy revered ancestor did receive of the Almighty Goddess the Sphere of Light. By its power was our world rid of the menace which did beset it. Yet, alas, some few years past, there did arise a new threat--the Dragonlord. With his coming, he did steal away the Sphere of Light from us, plunging the land into darkness once more. Should this state of affairs be suffered to continue, the night must surely take unrelenting hold, and our realm perish. So I say to thee, of the bloodline of heroes, vanquish the accursed Dragonlord, and reclaim the Sphere of Light!"

King Lorik, known as Lars XVI (ラルス16世 Rarusu Jūroku-sei) in Japanese is the ruler of Alefgard in Dragon Quest. He often worries about his missing daughter, Princess Gwaelin, though he only tasks the Hero with defeating the Dragonlord and recovering the stolen Sphere of Light. 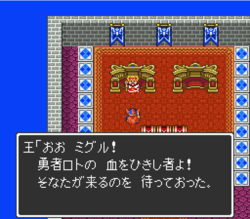 King Lorik giving instructions to the Hero in the SNES version of Dragon Quest.

In Tantegel, King Lorik is the first to speak with the Hero and requests that the descendant of Erdrick defeat the Dragonlord and recover the Sphere of Light. He gives the Hero 120 gold coins, a torch and a Magic Key to assist him in his quest. The Hero will also need to rescue his daughter Gwaelin from a Green dragon. King Lorik has the ability to tell the Hero how many experience points are needed to reach the next level and is the only person in Dragon Quest that can record your deeds onto the Imperial Scrolls of Honor.

At the end of the game, he offers his throne to the hero, but that offer is declined. If Gwaelin is rescued, he joyfully grants his blessings to their union.

King Lorik has been stricken with a curse that renders him unable to speak, and his daughter beseeches the Luminary and his allies to cure her father. After giving the king some spectrum nectar gifted by a tockle, he thanks the group with a Pallium Regale and recites a song in their honor.